Toronto subway relief line will be dug directly below houses 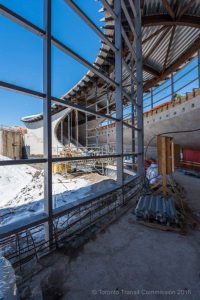 The province of Ontario issued a flurry of announcements last week, dedicating hundreds of millions in planning and design studies for new transit lines.

On June 1, the province committed $150 million to Metrolinx for planning and design work on a proposed “Relief Line” for downtown Toronto. No consulting engineer has yet assigned to help with the studies.

The next day, the province announced another $55 million towards detailed planning work for the Yonge North Subway Extension. That line will extend the Yonge line from Finch Station to Highway 7 in Richmond Hill.

And on June 3 the province promised more than $1 billion towards expanding the City of Ottawa’s LRT system. The Stage 2 project will start in 2018, once the Stage 1 Confederation line is complete. Stage 2 will add 30 kilometres, extending the network east, west and south. There will also be a new spur to the Ottawa Macdonald-Cartier International Airport and an extension to Orleans.

The preferred route for the Toronto Relief Line has been identified and public consultation meetings about it are being held this month. Plans are for the line to run entirely underground south from Pape Station on the east-west Line 2, down to Eastern Avenue where it will turn west and join up with the Yonge Line at Queen Station.

Mayor John Tory said at a press conference on June 2 that the $150-million planning amount would not be for a “study of a study.” The funds will be spent on “advancing the planning and design work that will ensure the proposed line is shovel ready.” The estimated cost of building the line is $3.2 billion.

Because the relief line would pass through a dense urban area the Toronto’s Chief Planner Jennifer Keesmaat has said that tunnels will have to be built directly below houses.  In a CBC report she said there wouldn’t be any expropriations, “But there will be people who didn’t have subway running underneath their house before who will now.” She pointed out that there are stringent noise and vibration guidelines from the Ministry of Environment.

Engineers HDR completed a study of the relief line in September 2012 for the Toronto Transit Commission. That study began with statistics on the need for the line owing to the strain on the existing downtown subway. It pointed out: “Transit serving the downtown core is reaching the limits of its practical capacity today…”  and said demand was expected to increase by another 55% in the future.

The subway is becoming more cramped every day thanks to an increased population who live and work in downtown towers. There are also new development areas all along the Waterfront.

To read more about the proposed Toronto Relief Subway line, which is expected to be completed this year, click here.

To read the announcement about the Ottawa LRT Stage 2 expansion, click here.