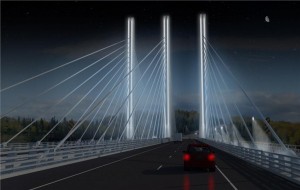 Ontario’s Transportation Minister, Steven Del Duca, was due to head up to the Nipigon River Bridge in northwestern Ontario on Wednesday.

Part of the steel decking of the bridge lifted almost 60 centimetres on January 10, reportedly during very high winds. No-one was injured but the crossing was closed for almost a day, which severed the Trans-Canada Highway and “cut Canada in half,” said one media report.

The $106-million project is still under construction and has earned a high profile as Ontario’s first cable-stayed bridge.

Initially reports suggested that the cold temperatures had caused an expansion joint to fail, and that a gust of wind had lifted the deck from its base. At the end of Monday, Ontario Northern Development and Mines Minister Michael Gravelle told CTV News, “Apparently the bolt that holds the girders in place, which keeps the bridge level, broke in some fashion and that lifted the bridge up.”

By Monday crews had relevelled the bridge temporarily using the weight of 110 highway barriers. That allowed a single lane to be reopened to traffic in both directions, but only for cars and regular weight trucks.

Gary Weiss spoke of the Ontario Ministry of Transportation said that the bridge had many redundancies and is really flexible.

The crossing is on Highway 11 located near the municipality of Greenstone, about 250 kilometres northeast of Thunder Bay. It links Ontario to western Canada and carries around 1,300 trucks a day carrying goods worth $100 million. When the bridge was closed trucks were diverted through Sault Ste. Marie and the United States.

The NDP MP said the incident demonstrated the need for more infrastructure in northern Ontario.

Construction on the bridge started in the summer of 2013. The westbound side was opened to two-lane traffic in November last year and completion is set for 2017. It has three towers rising 70 metres above the river, and a main span 139 metres long. McCormick Rankin and Buckland & Taylor are the design engineers.