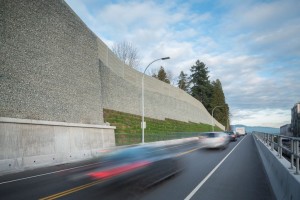 A project by Stantec Consulting in Port Metro Vancouver has been awarded the first ISI Envision Platinum Award. The Envision rating measures the sustainability of infrastructure projects.
The project involved the realignment and elevation of approximately 2.6 kilometers of Low Level Road at the port to provide space for two new rail tracks. Three existing road and rail crossings were eliminated, allowing direct access to the port terminals.
In addition, the project addressed safety, recreation and noise challenges associated with port operations along the Low Level Road. It included the reconfiguration of three intersections and added improved lanes for cyclists. The project also involved the continuation of the Spirit Trail pedestrian walkway, where it added structures over two creeks and an overpass.
Stantec Consulting was the principal consultant on the project, which was funded by several parties, including Port Metro Vancouver, Canadian National Railway, Translink, Canadian Pacific Railway, and the City of North Vancouver.
“Stantec is very proud of our work on the Low Level Road, and we are thrilled it is the first Envision-verified transportation project in North America,” said Neal Cormack, who is the firm’s B.C. managing principal of transportation. “On this multifaceted project our team realigned the roadways to accommodate rail expansion and increase safety, while securing the road’s slopes and bridge structures to enhance resiliency, protecting against sea level rise and seismic threats.”
The ISI’s Envision Sustainable Infrastructure Rating System measures five categories: quality of life, leadership, natural world, resource allocation, and climate and risk.
In the quality of life category, the project was recognized for stimulating sustainable growth and development. The economic impacts generated by the port terminals are expected to rise from providing almost 26,000 direct and indirect jobs and $1.68 billion in GDP in 2007, to 30,800 direct and indirect jobs and $2 billion in GDP by 2020.
In the climate and risk category, the project received high scores through the reduction of air pollutant emissions, its assessment of climate threat and adequate preparation for long-term adaptability.
In the leadership category, the Low Level Road project rated highest for its stakeholder involvement. The Port used an engagement framework based on the International Association of Public Participation core values and guidelines and engaged with local residents, local businesses, First Nations communities, port tenants and partners, CN Rail and CP Rail, City of North Vancouver, and TransLink.
The project also rated highly in the natural world category in terms of prime habitat and species biodiversity, particularly in protecting Pacific Yew trees and bald eagle habitat. The Port hired eagle experts with the Hancock Wildlife Foundation to provide recommendations on how to minimize the project’s impacts on the birds.