Ottawa bridge wins yet another award 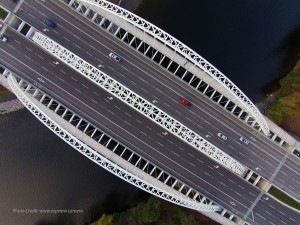 The Vimy Memorial Bridge, which was designed by Parsons for the City of Ottawa, received an Award of Excellence in the international category from the Quebec Association of Transportation (AQTr) this month.

The annual award recognizes outstanding projects that have helped to promote or improve transportation.

Opened last July, the bridge crosses the Rideau River in Ottawa at a location that is part of the Rideau Canal System, a recognized National Historic Site and a World Heritage Site of the UN Educational, Scientific and Cultural Organization.

“Parsons is pleased to be recognized with this prestigious award from the Quebec Association of Transportation,” said Todd Wager, Parsons Group president. “This new superstructure not only addresses the needs of the motoring public by connecting two growing communities, it also stands as an elegant and inspirational gateway to Ottawa, the national capital of Canada.”