Edmonton’s bridges overcome the great divide of the North Saskatchewan River. The crossings include the Walterdale Bridge, built in 1913 to link the downtown (to the north) with the once-separate (but now amalgamated) south-side community... 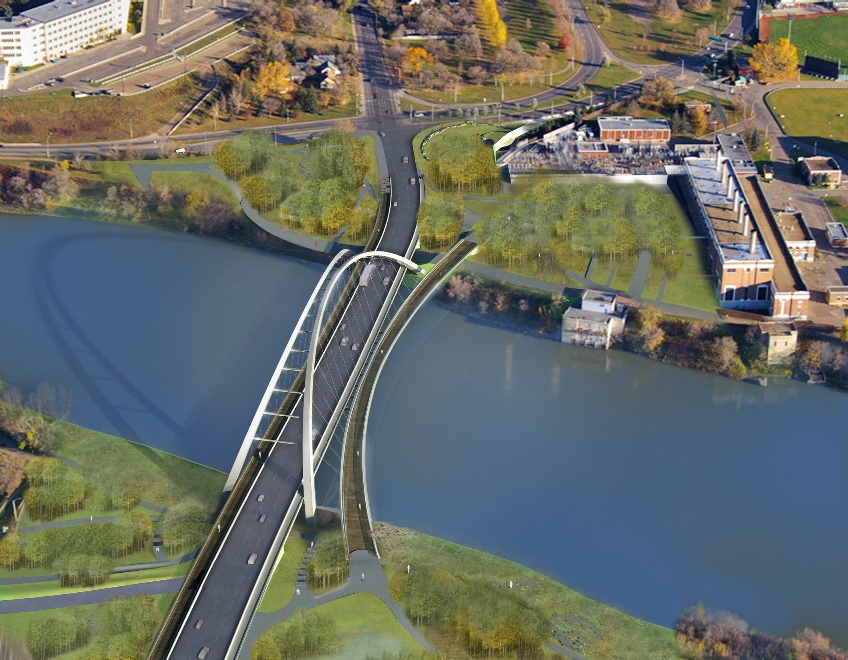 Edmonton’s bridges overcome the great divide of the North Saskatchewan River. The crossings include the Walterdale Bridge, built in 1913 to link the downtown (to the north) with the once-separate (but now amalgamated) south-side community of Strathcona. Much water has flowed under the bridge in the past century. The Walterdale has served Edmonton well and some 33,000 vehicles rumble across it daily, but it is being retired and replaced by a new thrust-arch bridge under construction and slated for 2015 completion.

The Edmonton office of the multi-disciplinary firm DIALOG has been involved in the project, starting with preliminary design in mid-2011, followed by detailed design completed in early 2013. During those phases, DIALOG Associate Kris Lima, P.Eng., was deputy project manager of the bridge design team. Now that the bridge is under construction, DIALOG serves as the owner’s representative for the City of Edmonton, and Lima’s title is construction manager.

The North Saskatchewan River Valley provides valuable greenspace and recreational areas in Edmonton. Therefore, Lima notes, it was important that the new bridge not become “overly intrusive.” Furthermore, designers didn’t want the structure to shift too much attention from the nearby High Level Bridge, a century-old landmark opened a year before the old Walterdale.

A defining feature of the new $126-million structure will be its supporting twin aches.

“The consensus was that an arch-type structure fitted the environment the best,” explains Lima.

The bridge has a 230-metre deck and a single span. This is facilitated by the thrust-arch design, which eliminates the need for in-stream piers. The single span also offers advantages in facilitating ice movement on the river. When ice-free, the open river channel enhances safety for pleasure craft.

Lima considers a separated shared-use bicycle and pedestrian pathway as the project’s most unique feature. Literally and figuratively, the path sets the new bridge apart. Running along the east side of the three vehicular lanes, the pathway is supported by the same arches as the vehicular bridge, but it is separated from it by a gap which ranges from 8 metres to 2 metres across. “The intent,” suggests Lima,“is to enhance the experience of cyclists and pedestrians and to provide a feeling that they are separated from roadway traffic.”

The other (west) side of the bridge has a straight bike/footway, which in future could be removed to add a vehicle lane.

The diameters of the bridge’s arch ribs taper from about 2.5 metres at the base to about 1.4 metres at the top of the arch, which extends 43 metres above the bridge deck or about 55 metres above normal river levels. The two arches incline toward each other at about 14 degrees off the vertical, adding further to the structure’s aesthetics. The project has, says Lima, resulted in: “some very unique and defined geometry associated with the main arch structure and the separate shared-use path.” The structural engineer admits the bridge’s asymmetry did lead to “a major design challenge of taking these two arch ribs and hanging off a massive load to one side, which introduced a fairly significant load imbalance.”

Less apparent to casual observers but certainly innovative – at least for Edmonton – will be the stationing of massive 400-cu.m concrete thrust blocks 15 metres below grade in the underlying shale and limestone bedrock. With glacial till and clay so prevalent in the Edmonton area, designers and builders of major structures have tended to resort to deep pile foundations. So, using thrust blocks amounts to a new departure for an Edmonton bridge – an innovation for which Lima believes the participating geotechnical and structural teams deserve particular credit.

Use of the 206-m wide thrust arches allowed the foundations to be made closer to the water and farther (12 metres) from the bridge abutments. This provides added space facilitating pedestrian movement under the bridge and near the river’s edge.

Two years hence traffic will be switched to the new from the old bridge, which is scheduled for demolition in 2016.

Nordahl Flakstad is a freelance writer based in Edmonton.