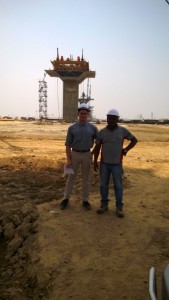 Brook Robazza of McElhanney (left), and Surya Prakash, project manager of the Arrah-Chhapra Bridge being constructed over the River Ganges in northern India. Photo: McElhanney.

It’s certainly one way to verify whether the structural models are accurate. Brook Robazza of McElhanney Consulting was at the site office of the firm’s Arrah-Chhapra Bridge project in northeast India when the earthquake tremors hit northern Nepal on April 25 and May 12.

Thankfully Robazza — and the bridge survived.

The 4.3-kilometre bridge is being erected over the Ganges River, about 300 kilometres south of Kathmandu where a 7.9-magnitude earthquake struck around noon on April 25. Then around the same time on May 12, a 7.3-magnitude quake struck close in the town of Namche Bazaar near Mount Everest.

After the first earthquake Robazza reported back to the McElhanney head office in Vancouver.

“After noticing the ceiling fans starting to swing around in the office, I ran outside to see wide-scale panic as people were fleeing the buildings. Site vehicles were rolling and bouncing about, and sign posts were shaking from side to side.”

Robazza was about 175 metres from the bridge. The tremors, Robazza estimates were noticeable for about a minute.

“Being a bridge engineer, I immediately thought to check on the bridge as quickly as possible.” Within five minutes he was on the move. “I ran over there pretty quickly and hopped on the footings as soon as I was sure the thing wasn’t going to come down on me.”

The bridge is in its fifth year of construction. The substructure and piers are all complete, but work on the superstructure is still underway and the piers are not yet connected. Even from a distance Robazza had been able to see the piers and pylons oscillating. People closer said the structures were moving around 300-500-mm longitudinally.

But the seismic modelling studies held up. Despite the vulnerability of the bridge at this stage of construction, close inspections after the April 25 event found only negligible flexural cracking at the base joints. The cracks are not of structural concern, but are nonetheless being repaired using epoxy injections.

On the same day that the May 12 quake hit, Robazza e-mailed CCE saying: “Thankfully no one was hurt and the bridge performed well. ”

Robazza recently earned his Ph.D in seismic engineering and has spent his life on Vancouver Island and in the Lower Mainland of B.C. but hadn’t actually experienced an earthquake before. “It is ironic really,” he says, “that no sooner did McElhanney transfer me to India than a week later there was a major seismic event.”

It was a practical education in the extreme: “Being able to observe what was in fact a full-scale test of a very large bridge and compare it to the predicted behaviour from the model is something that very few engineers have the opportunity to witness.”

“I was very fortunate to have gained this experience while coming out alive,” he says.

Others were not so lucky. Most recent counts estimate that as a result of the April 25 event more than 7,300 people lost their lives in Nepal and 14,000 were injured. Earliest counts of the quake on May 12 had over a thousand injured and close to 50 dead.

The Arrah-Chhapra Bridge is being built in Bihar, one of the poorest states in India. It is expected to improve the accessibility and prosperity of the region.

Infinity Engineering, which was acquired by McElhanney in 2014, was the lead design firm for the conceptual and detailed design, and construction supervision 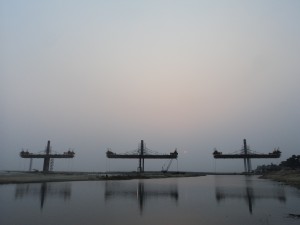