First Nations communities along the east side of Lake Winnipeg in Manitoba are being connected by permanent roads to the provincial road system for the first time. 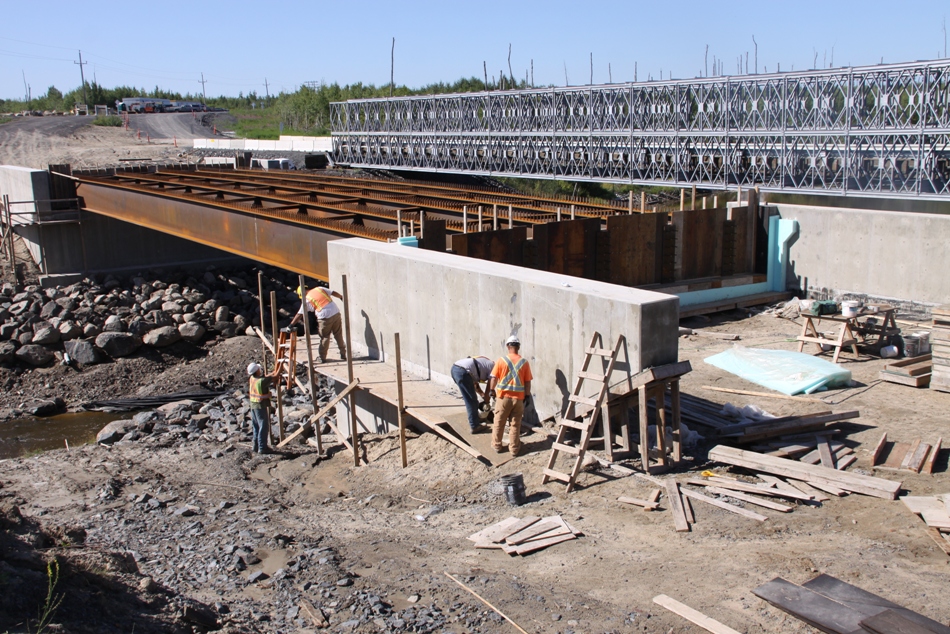 Wanipigow Bridge, one of the bridges on Manitoba's new permanent road system along the east side of Lake Winnipeg, under construction last summer. The bridge was completed in time for this winter season. Photo courtsy East Side Road Authority, Government of Manitoba.

First Nations communities along the east side of Lake Winnipeg in Manitoba are being connected by permanent roads to the provincial road system for the first time.

The Government of Manitoba’s East Side Road Authority has started construction of roads and bridges along the all-season network, which altogether is estimated to cost approximately $3 billion and once completed will cover 1,028 kilometres. The overall project will take up to 30 years to complete.

SNC-Lavalin established the routes in a two-year long study, known as the Large Area Transportation Network Study, which was officially released in June 2011. Now, AECOM is the prime consulting engineering firm implementing the project, and Dillon Consulting is the contract administrator. Both companies are working on the road and bridge works.

Last week, Manitoba Premier Greg Selinger visited Manto Sipi Cree Nation near Gods River to see first-hand how work is progressing. A series of new permanent and some temporary bridges is under way and Chief Michael Yellowback said the communities are already benefiting, since warming temperatures had put the current winter roads in jeopardy. “Winter roads in our region are no longer reliable,” Chief Yellowback said. “Our First Nation is pleased to work with the province to extend the winter road season immediately as we train and hire local residents who will eventually build and maintain permanent roads.”

The new all-season road network is actually divided into two. The southern section starts at provincial route 304 near Hollow Water and threads 150 kilometres north along Lake Winnipeg, connecting communities such as Bloodvein, Berens River and Poplar River. An east-west extension branches off north of Bloodvein and runs 93 kilometres to communities and an airport at Little Grand Rapids.

The northern section of the network is a 650-kilometre all season road that starts at the northeastern tip of Lake Winnipeg near Norway House and provincial roads 373 and 374. The road goes east and splits into a Y section at Molson Lake, with one arm ending at God’s Lake, and the other passing through Island Lake and on to Red Sucker Lake.

In the northern section the work that is under way includes new bridges in the Island Lake region and Red Sucker Lake, while in the southern section a new bridge over the Wanipigow River has already been completed as well as sections of permanent road near Berens River.

First Nations communities make up 97% of the area served by the new network. They were consulted during the planning stages and were much in favour of the east-west route rather than a north-south route for the northern section. A north-south route would have had to cross more virgin territory, including extensive rocky outcrops, swamps and muskeg, whereas the east-west route had more areas that would provide a good foundation for the road and it was close to locations with access to road-building materials. Also, about 80% of the east-west all season route follows an existing winter road corridor.

Thanks to a $50-million Community Benefits Agreement that the East Side Road Authority has entered into with 13 First Nations, First Nations people will help with the projects, including working on the preconstruction work, such as gravel crushing, clearing rights of way, and road improvements.

Once the all-seasons roads are in place, the cost of transporting goods and supplies to the communities should be cut by 50 per cent, while the cost of medical transport is expected to be reduced by 40%.