An alliance between the city of Edmonton and six other municipalities is beginning a $90 million project of improvements to what is the longest metropolitan park system in North America. 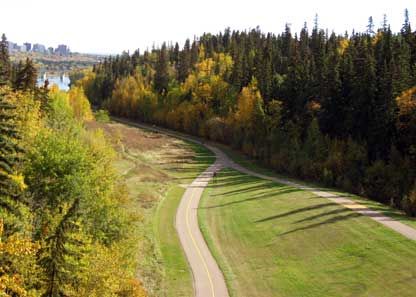 An alliance between the city of Edmonton and six other municipalities is beginning a $90 million project of improvements to what is the longest metropolitan park system in North America.

The River Valley Alliance has 13 initiatives to improve public access to the park along the North Saskatchewan River, which stretches for 88 kilometres and covers 7,400 hectares. Plans are to add and rehabilitate 74 kilometres of trail, as well as adding docks and boat launches and a pedestrian footbridge in Edmonton. They will also add a “mechanized access amenity” from downtown Edmonton to a waterfront promenade.

Planning and feasibility studies for several projects are beginning immediately with construction expected to start this spring.

Christopher Sheard, chair of the River Valley Alliance board of directors, said: “These initiatives will bring social, economic and environmental benefits to citizens and communities along the river valley. The project will go a long way to improve access to the river and make the connections between people and communities that are needed to fulfill our dream: to develop a continuous, publicly accessible river valley park.”

The River Valley Alliance is a collaboration of the seven municipalities along the capital region’s North Saskatchewan River Valley, which are: Town of Devon, Parkland County, Leduc County, City of Edmonton, Strathcona County, Sturgeon County and City of Fort Saskatchewan.

The federal government is contributing up to $30 million to the projects, and the province and municipalities are covering the rest.