Concrete is "precious" and should be used wisely, said John Archer, at Construct Canada in Toronto on December 1. Archer is the former director of sustainability with the Cement Association of Canada, and he urged the audience to look on... 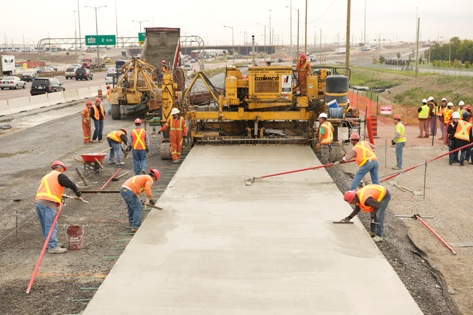 Concrete with Portland Limestone Cement being laid on an exit lane off Highway 401 eastbound near Toronto. The pavement will be monitored over three years. Photo courtesy Holcim Canada.

Concrete is “precious” and should be used wisely, said John Archer, at Construct Canada in Toronto on December 1. Archer is the former director of sustainability with the Cement Association of Canada, and he urged the audience to look on concrete as as precious as gold and silver from a sustainability point of view.

He believes that while proponents of wood and steel make claims about their products being recyclable, etc. concrete has many advantages from a sustainability point of view. It is immensely durable and has a very long service life (he pointed out that the Pantheon in Rome is over 2,000 years old.)

Concrete has thermal mass for storing and radiating heat or cold in buildings.  Products such as hollow core precast beams can be used to move heat or cold around in a building, while buildings like the Kortright Centre outside Toronto have huge concrete “earth tubes” to bring tempered air inside. Concrete is also a more safe building material, Archer argued: it is not combustible, and it withstands shocks better than other materials.

Having dispatched concrete’s rivals (he voiced particular concerns over the use of wood for 6-storey buildings, as is permitted in B.C.), Archer went on to explain how the concrete industry is working to reduce the amount of greenhouse gases it produces. Concrete is certainly not a panacea, he said. The cement industry currently ranks #17 in the top 18 producers of carbon dioxide in Canada. (The oil sands produce 30 times as much, however, he said). The problem is that it takes so much energy to heat limestone to high temperatures in kilns in order to produce cement. Most of the kilns are heated with coal at present.

Supplementary cementitious materials, or SCMs, are one solution, Archer said. They include industrial byproducts such as flyash and silica fume.

But researchers and concrete producers are now pinning their hopes on a new class of cement, called Portland Limestone Cement. Archer explained that instead of burning the limestone in a kiln to make cement, it is ground extremely fine to almost nano-particle size, when it takes on pozzolanic properties. The limestone cement has been shown to have properties exactly like regular Portland cement, said Archer, except that its sulphate properties have not been finally determined. It has similar set times and strength as regular Portland cement, but like other SCMs Portland Limestone Cement requires less water and because of its very fine particles and bleeds less.

Archer said that new CSA standards A300 and A23.1 permit up to 15% limestone Portland Cement, and that they will be referenced in the new National Building Code of Canada NBC 2010, which is due to be published “momentarily.” He said that some of the large concrete producers have it available, but “you have to ask.”

Archer argues, however, that the most sustainable way to use concrete is to remember that it is precious, and so use as little of it as possible. We should be designing buildings more like “race cars,” he said, with streamlined and light structural members. Also, by adopting new technologies such as Bubble Deck and the hollow core slabs, designers can provide structure while minimizing the amount of concrete.

Archer also favours “open architecture” in which buildings are designed so that they can be transformed to different uses over time, thus prolonging their lives, and thus reducing our consumption of the earth’s resources.

Although Archer didn’t mention them, there are two field tests being conducted with Portland Limestone Cement on highways in southern Ontario. The tests are being done by the Ontario Ministry of Transportation, Holcim Canada, and the University of Toronto. One is a cast-in-place concrete barrier wall on the Queen Elizabeth Way, and the other is a slipformed concrete pavement on Highway 401. The University of Toronto’s Department of Civil Engineering is monitoring the applications for three years.