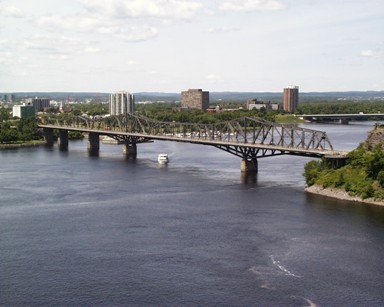 Public Works and Government Services Canada is rehabilitating four historic bridges in Ontario with approximately $50 million from the Federal Infrastructure Stimulus Fund.
Construction is underway on the two bridges which are located in the National Capital Region of Ottawa.
The Chaudière Crossing is the oldest bridge in the National Capital Region, having been built in the 1820s. It crosses over Chaudière and Victoria Islands, linking Gatineau and Quebec, and is still heavily used by commuters, carrying 28,000 vehicles every day.
The repairs include placing new footings in the water and reinforcing the arch sections with precast segments that will be slid underneath them. The project involves a cofferdam and dewatering. GENIVAR is the consulting engineer designing and supervising construction, with Kiewit doing construction.
McCormick Rankin Corporation is doing the engineering design and supervising construction on the Alexandria Bridge rehabilitation, which is also under way in the National Capital Region. This 560-metre steel truss cantilever bridge was constructed across the Ottawa River between 1898 and 1900 for the Canadian Pacific Railway.
Another historic PWGSC bridge being rehabilitated by engineers McCormick Rankin is the LaSalle Causeway Bascule Bridge, a Strauss Trunion swing bridge constructed in 1917 at the southern end of the Rideau Canal in Kingston. The bridge is named after Joseph Strauss, who designed the Golden Gate Bridge in San Francisco.
The Burlington Lift Bridge is also being rehabilitated. The present bridge was constructed in 1962, but there have been five different moveable bridges on the historic canal site since 1830. With a lift span of 380 feet, a vertical lift of 110 feet, and a weight of 2200 tons, the bridge is operated approximately 4,000 times a year to let boat traffic through. Staff at PWGSC are doing the engineering on this two-year project, of which phase one is complete.
Projects funded by the federal infrastructure stimulus fund have to be completed by March 31, 2011.