A third bridge across the Athabasca River near downtown Fort McMurray opened on December 10. 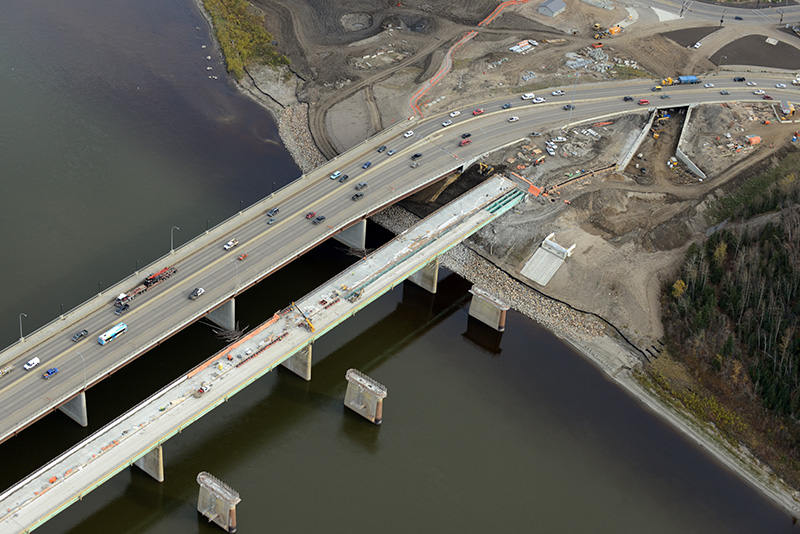 Bridges over the Athabasca River in Fort McMurray, Alberta. The Athabasca River Bridge is completed on the left, the Steinhauer Bridge is shown under construction in the middle. On the right are the piers that were re-used for the new Grant MacEwan Bridge that was just opened. Photograph courtesy Alberta Transportation.

A third bridge across the Athabasca River near downtown Fort McMurray opened on December 10.

Over the past few years three different new bridges have been constructed to create a seamless traffic flow on Highway 63 into and around the booming oilsands city. The three new bridges are designed as a tripartite network to separate the longer haul and large commercial vehicles from local commuter traffic going into downtown Fort McMurray.

Stantec was prime consultant on the most recently opened crossing, the Grant MacEwan Bridge and the Franklin tunnel. These carry southbound traffic across the river directly into the downtown.

Running parallel to the north is the Steinhauer Bridge, also completed this year. It has three lanes carrying southbound through-traffic.

Then on the north side, the large Athabascar River Bridge has five lanes going northbound. This bridge was completed in 2011 and is designed to handle vehicles weighing 12 times more than the standard weight in order to carry the massive equipment going up to the oil sands. It has the largest bridge deck in Alberta at 15,500 square metres, and in 2012 over 500 superloads weighing 180 metric tonnes or more used the bridge.

The new Grant MacEwan Bridge has two lanes and is 456 metres long (clear span length). It replaces a narrow truss bridge structure built in 1965 that was the first bridge to span the Athabasca River in Fort McMurray. It was removed and the piers were cut down so that the new bridge deck could be built at a lower elevation to connect to the new Franklin Tunnel. To reduce the construction time and reduce the environmental impacts, the construction team used an ice bridge as a building platform, which enabled them to work in the winter months.

Together the investment for all three bridges is $236 million, while the total investment in recent Highway 63 projects within the Regional Municipality of Wood Buffalo is $750 million.

Melissa Blake, mayor of the Regional Municipality of Wood Buffalo, said at the official opening of the Grant MacEwan Bridge: “Today’s bridge opening is another welcome move that improves Fort McMurray’s transportation network and gives our residents better access to downtown. In a few short months, Highway 63 between our city centre and the Confederation Way interchange has changed significantly for the better.”