Construction of all-season infrastructure to the Slave Geological Province Corridor has the potential to bring major economic development opportunities by reducing the costs of operating existing mines.

The federal government has announced an investment of $30 million for environmental planning and studies supporting the Slave Geological Province Corridor in the Northwest Territories.

Construction of all-season infrastructure to the Slave Geological Province Corridor has the potential to bring major economic development opportunities by reducing the costs of operating existing mines and future resource exploration and development activities. An all-weather corridor will be more resilient to the impacts of climate change, providing a safer and more reliable means of transportation.

The announced funding will support: 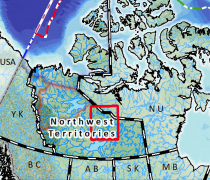 “Canada continues to support northern transportation infrastructure. From the significant investments we have already made in the Mackenzie Valley Highway, to this current funding for the Government of the Northwest Territories priority of advancing the Slave Geological Province Infrastructure Corridor, our Government has demonstrated a clear commitment to the North,” said Michael McLeod, MP for the Northwest Territories, in a media release.

All-season highways and winter ice roads in the North handle more than one million tonnes of freight traffic each year. This project will complete preparatory work necessary for construction of a major new, all-season road that would connect communities and economic development sites in the Northwest Territories.

Infrastructure development is more costly in the territorial North than in southern Canada due to severe climate, difficult terrain, vast distances, limited access to materials and expertise, and a much shorter construction season.

To improve and expand infrastructure in the northern regions of Canada, Budget 2019 increased the allocation of the National Trade Corridors Fund to Arctic and northern regions by up to $400 million over eight years, starting in 2020–21, bringing the total allocation to these regions to $800 million.

Related Stories
Feds commit $102.5M to bridge and all-weather road development in NWT
Money for roads flows to north
RFQ released for 97-km highway in Northwest Territories
Feds commit $4.1B to infrastructure in B.C., $3.3B in Alberta