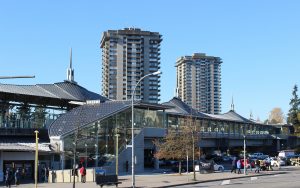 Metro Vancouver’s latest extension to its light rapid transit network will open in early December, giving the city the longest fully automated and driverless rapid transit system in the world.

On December 2 trains will start running on the Evergreen Line, which links four municipalities east of Vancouver to the Skytrain system. Stretching 11 kilometres long, with seven stations, the line integrates with the existing LRT at Lougheed Station, where a third platform was added.  The station was designed by DIALOG with Read Jones Christoffersen as structural engineers.

The line then travels on to Burnaby, Port Moody, Port Coquitlam and Coquitlam. The journey is expected to take 15 minutes,and the line is expected to carry 70,000 passengers a day by 2021.

The line includes a 2-km bored tunnel between Coquitlam and Port Moody, as well as grade and elevated portions. Partly for safety reasons, the stations are designed with large glass exterior walls, strong lighting and uncluttered landscaping.

The project was funded by the governments of Canada, B.C. and Translink.