After chunks of concrete fell from under the Gardiner Expressway in downtown Toronto last year, the city is now in a quandary as to what to do about the 1960s-era vital traffic artery. The elevated section of the expressway runs along the... 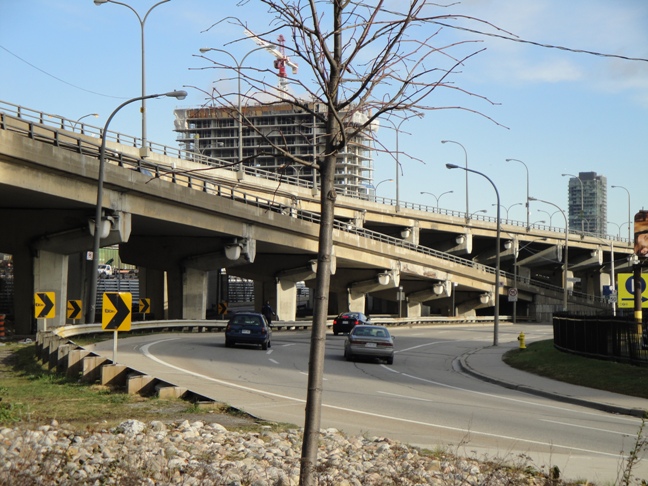 After chunks of concrete fell from under the Gardiner Expressway in downtown Toronto last year, the city is now in a quandary as to what to do about the 1960s-era vital traffic artery. The elevated section of the expressway runs along the southern edge of the city, with Lake Ontario on one side, and the core of banking towers and venues like the CN Tower and the Rogers Centre on the other. These days the traffic also threads closely through a veritable forest of concrete and glass new condo towers sprouting up in the area.

Last year the city assigned $500 million for repairs and replacing the highway’s deck, but at a press conference at City Hall on April 2, city engineers explained that they are changing their tack on the project.

John Kelly, head of engineering services with the city, said that although staff have been working on designs for the eastern section, they have switched and are now concentrating on rehabilitating the western section of the road between Strachan and Rees. The engineers will be presenting their new option to the public works committee next week.

This decision makes sense since the city is contemplating whether to take down or replace the eastern elevated portion, from Jarvis to the Don Valley Parkway. Why spend $200 million on replacing the deck of a structure that could well be demolished.

While waiting for the decision on that, the city is continuing doing interim repairs to the expressway as a whole, such as repairing the parapets on certain portions, adding temporary bracing, and doing ongoing visual inspections and controlled chipping of the underside concrete. The short term repairs and rehabilitations are expected to cost around $495 million.

To find out where the road is in worst shape they have been using ground penetrating radar. Kelly said the technology is “useful and inexpensive,” but that they still need to do more detailed investigations of the condition of the deck, and they can’t do those investigations until May when weather permits. IBI group has been acting as a consultant.

Kelly showed a colour coded graphic based on their studies so far which showed that some of the worst sections of the roadway are between Strachan and Bathurst, Yonge and Jarvis, and east of Cherry Street.

All this left members of the press questioning Kelly and other city officials as to whether the road was safe. They wanted to know why things are taking so long when engineers have previously said the road only has six more years of useful life.

Last year the city restarted an environmental assessment process on what to do about the elevated roadway. There are four alternatives: do nothing; maintain and improve it; replace it; or remove it and build a new boulevard. For the replacement option, there has been talk of having a tunnel.

Once council decides on the preferred option next spring, there will be further public consultations. The environmental process could then take up to five years to complete, so nothing drastic is going to be done soon.

Asked what would be the cost of taking down the expressway, Kelly said figures vary widely and at this point, all he could say was that it would be “between $200million and $1 billion.”