Delays in Toronto subway could prompt handover to consulting engineers

Engineering reviews recommend a complete reset of the project management. 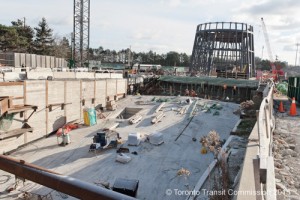 Pioneer Station under construction on the Toronto York Spadina Subway Extension (TYSSE). The cone-shaped structure at the end is the entry. Photo: TTC.

Trouble erupted in Toronto last week when the news that the latest extension to the city’s subway system was going to be completed years later than the originally scheduled date of 2015.

He also said that the TTC board is considering whether it should continue to manage its own construction projects in future.

The 8.5-kilometre, six-station, TYSSE line goes northwest from Downsview, beyond York University and into Vaughan. It is expected to be at least $150 million over budget. Construction started in 2008 and Byford said that unless new action is taken, it won’t be completed until 2019, four years late.

The TYSSE project is only one in a series of TTC projects that have got into difficulties, and on March 19 Byford had fired two top executives involved in the TYSSE project, Sameh Ghaly, the chief capital officer, and Andy Bertolo, the chief project manager. Last month, Toronto Mayor John Tory had said he was “furious” with progress and financial “bleeding” on the TYSSE and other projects

In an interview on CBC’s Metro Morning on Monday, March 22 Byford said that problems with the TYSSE line were related to project “scope creep” and delayed financing at the project’s outset. Other factors are two very cold winters and the death of a worker at the York University station site which led to Ministry of Labour investigations lasting months had also slowed things down.

In a follow-up interview on the CBC, Steve Monro, a well informed Toronto transit commentator and blogger, said that the problems with the TYSSE line were partly related to the fact that the stations were designed as architectural showcases, which adds to their structural complexity.

Byford has also acknowledged that many of the project’s problems are due to bad relations between the TTC and its contractors over delays and delayed payments.

So far the tunnelling is virtually complete and five of the stations are over 70% finished. The York University Station is the true laggard at only 35% completion.

The TTC board is to consider various options for going forward at its meeting on March 26. Three of the options involve retaining a third party private consulting firm to manage the project. The board has to decide whether to use a request for proposal system to select a new project manager, but it’s estimated that the RFP process would add another six months and approximately $30-million to the project compared to hiring a consultant project manager on a sole source basis.

Byford took charge at the TTC in 2012 and became concerned about the TYSSE project in 2013. He commissioned a series of studies on the project. First was a review by Parsons Brinckerhoff, followed by a peer review by the American Public Transit Association. It recommended a “project reset” and that there should be incentives to get the contractors to meet the 2017 completion date. Over 2014-15 Bechtel Construction reviewed the project again, and they agreed with APTA that the project needed new project management.

The problems with the TTC projects are only part of the picture of construction delays occurring in the Toronto Region. The Toronto Star’s Saturday edition on March 21 had two full pages devoted to the topic. It listed nine other major transportation projects that were up to seven years delayed or millions over budget, and sometimes both. Budget overruns ranged from 24% to 85%. They were projects of the TTC, Metrolinx, the City of Toronto, and Waterfront Toronto.

For a comprehensive reporting by Steve Munro on the situation, click here.