Work on the troubled but spectacular Deh Cho Bridge project in the Northwest Territories is now back on track.... 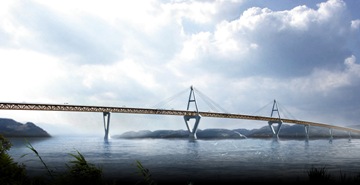 Work on the troubled but spectacular Deh Cho Bridge project in the Northwest Territories is now back on track.
The 1-kilometre crossing will span the Mackenzie River at Fort Providence near Great Great Slave Lake in the Northwest Territories, creating the first permanent road link on Highway 3 between the Alberta border and Yellowknife. Currently the traffic on Highway 3 has to cross the river by ferry in summer or by an ice bridge in winter. The bridge will also serve traffic travelling farther on to the diamond and gold mines in the north.
The Deh Cho project began in 2007 as the Northwest Territories’ first design-build project. The Deh Cho Bridge Corporation was responsible for design and construction. However, following reviews on behalf of the NWT by BP Tech and T.Y. Lin and others, construction was halted. At that point some of the substructure had been built.
The bridge was subsequently handed over to new engineers to redesign. Also, a new construction company, Ruskin Construction, replaced Acton Construction in early March. Ruskin is expected to complete the bridge by November 2011.
The engineers doing the redesign are Infinity Engineering Group of Vancouver as engineer of record, and Sargent & Associates Engineering as prime consultant. They hired URS Corporation’s Tampa office to do an external peer review. CH2M Hill and Associated Engineering are also involved in monitoring the project on behalf of lenders and the client.
The redesigned crossing – which had to fit with the already-built substructure — is 1,045 metres long. According to Prabhjeet Raj Singh, P. Eng. of Infinity Engineering, it is a 2-lane nine-span composite steel truss bridge with a cable-assisted main span of 190 metres.
The redesign applied the principles of lightweight design, with a conventional truss system and a continuous and jointless deck, 235mm thick, for the entire bridge length. Compact locked-coil cables are proposed for the stay system. The redesign simplified and improved the constructability of the bridge and saves 20% in structural steel tonnage.
On March 23, the NWT Legislature will assume the assets of the Deh Cho Bridge project and also is to assume the debt of the Deh Cho Bridge Corporation, totalling $165 million. The project is to be financed by savings from eliminating the current ferry and ice bridge operations, as well as a by a toll on commercial vehicles making the crossing.
Once built, however, the bridge is expected to serve the North Slave Lake region for 75-100 years.