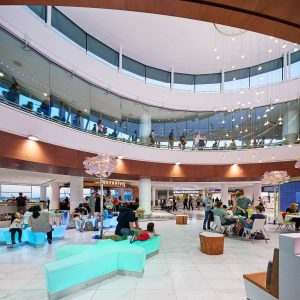 Stantec has redesigned the passenger space  at Terminal 3 in Toronto Pearson International Airport.  In the Departures level, stores and restaurants used to be in a narrow, dark area before passengers go through security.  Now they are reconfigured into a new area called Node C, which is full of natural light and accessible once through the security gates.  A large skylight now extends from the departures floor up through arrivals.

The Mississauga Gateway Centre in the Greater Toronto Area was designed by Ware Malcomb, with Dorlan Engineering as structural engineering consultants and Inviro Engineered Systems as mechanical and electrical engineers. Located at One Prologis Boulevard and Hurontario Street, it consists of a five-storey curved building of 150,000 square feet facing the boulevard, and and another single storey building of 45,000 square feet. The building is designed for LEED Gold certification. 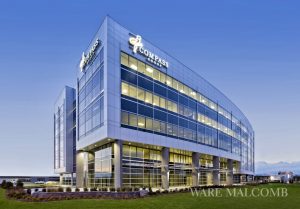 Peter Kiewit Infrastructure has been awarded a $61-million contract to build two highway overpasses, one at Martensville on Highway 12 and another at Warman on Highway 11, in Saskatchewan. The overpasses are in two of the fastest growing communities in the province. Kiewit was one of three companies vying for the design-build partnership with the Ministry of Highways and Infrastructure.

AECOM is the designer for the Stoney Compressed Natural Gas Bus Storage and Transit Facility in the City of Calgary.  AECOM is part of Plenary Infrastructure (Canada), the proponent selected to design, build, finance and maintain the facility for Calgary Transit. The facility will hold a minimum of 424 standard 40-ft. buses, including a new fleet of compressed natural gas buses. The building will be designed for LEED Gold certification. Construction is scheduled to be completed after the contract and costs are finalized next month.