HDR was the consulting engineer who prepared the SmartTrack Western Corridor Feasibility Review for the City of Toronto. The report was prepared in partnership with the University of Toronto and presented to the public on January 19. Smart Track is Mayor John Tory’s proposal for using existing rail tracks for express commuter trains. The network would reach from around Pearson Airport in the west to Markham in the east and afford relief to the city’s subway system. The latest proposal has substituted some portions of the Smart Track network with new light rail.

Williams Engineering Canada (WEC)’s portfolio includes a structural evaluation of the giant T-Rex model in the Canadian Badlands. Standing at 85 feet tall, the T-Rex is 4.5 times the size of a real T-Rex and can hold 12 tourists in her mouth. WEC reviewed the interior and exterior of the exhibit using a crane lift and climbing inside the body using fall arrest training and equipment. Click here.

Structural engineers Read Jones Christoffersen and mechanical-electrical engineers Hidi Rae worked with EllisDon to design the new Cisco Innovations Centre which was official opened on January 12. Located on the 29th floor of Cisco’s offices at Waterpark Place III near Lake Ontario in downtown Toronto, the centre has classrooms, labs and demonstration rooms. 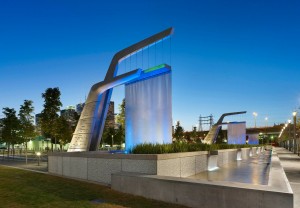 A project designed by The Municipal Infrastructure Group is being featured in an exhibition by the American Society of Landscape Architects. Sherbourne Common, the combined park and stormwater treatment plant in downtown Toronto, is one of 10 projects in the online exhibition, “Designing Our Future: Sustainable Landscapes.” The stormwater treatment plant incorporates UV technology and a bio-filtration bed to treat the water before it is released into Lake Ontario. It won a Canadian Consulting Engineering Award in 2012. Click here.