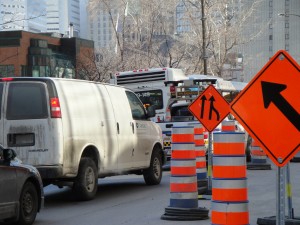 With perfect timing, just as Prime Minister Justin Trudeau and his Liberal cabinet were sitting down to discuss the upcoming federal budget at St. Andrews, New Brunswick, the 2016 Canadian Infrastructure Report Card was published.

The last time the report card was issued was in 2012, but the situation today seems little better, with the findings that one-third of municipal infrastructure is “at risk of rapid deteroriation.”

Kealy Dedman, president of the Canadian Public Works Association, one of the organizations that publishes the report card, said: “What this survey shows is that we need to repair our existing infrastructure. Our infrastructure is aging and we need to accelerate the rate of renewal. As any homeowner knows, repair costs skyrocket once you let things go past a certain point. We don’t want to get to that point.”

Trudeau’s government has promised to increase its investment in infrastructure by $60 billion over the next 10 years in order to kick start the floundering economy. However, there are concerns that large construction projects take a long time to begin whereas the economy needs an injection very quickly. There have also been questions raised as to whether there is enough “capacity” i.e. funds available, among the municipalities to provide the traditional one-third contribution to any projects.

The questions covered water and wastewater systems, roads and bridges, buildings, sports and recreation facilities, and — for the first time — public transit.

According to the introduction, the survey results have found that “despite a renewed commitment to infrastructure by the three levels of government in recent years, the impact of unpredictable investment patterns is still felt by municipalities today.”

The survey asked the municipalities to complete 100 detailed questions and qualitatively assess their infrastructure on a five-point scale, from very good to very poor. The results showed that 35% of assets are in need of attention, and that current rates of reinvestment are lower than the targets recommended by asset managers.

Roads, municipal buildings, sport and recreation facilities and public transit were found to be the most in need of care.

Water, wastewater and stormwater represent 30% of infrastructure in very poor or poor condition; roads and bridges represent $19%; buildings represent 17%, and sports-recreation facilities represent 18% (almost one in two of the latter were rated poorly). Transit represents 16%. (From these figures, consulting engineers could get a broad picture of where to allocate resources for work coming down the pipe.)

The study does not include other facilities such as waste management, or even affordable housing, which is known to be in a poor state in some large cities.

The total extrapolated value of replacing the assets surveyed that were found to be in poor or very poor condition was $141 billion. (See summary page 4, key messages).

Large municipalities were represented in the data more than small and rural towns who often don’t have the staff resources to  conduct detailed asset management.

Alain Gonthier of the City of Ottawa and Canadian Network of Asset Managers was chair of the Report Card Advisory Board. Nick Larson of GM BluePlan Engineering and CSCE also played a key role.

Municipalities own 60% of the country’s core public infrastructure. That infrastructure is worth about $1.1 trillion dollars, or about $80,000 per household.