Another two Canadian consulting engineering teams have won international awards. Buckland & Taylor/COWI of North Vancouver won the Honor Award at the Engineering Excellence Awards Gala in Washington, D.C. on April 21 for the Milton-Madison Bridge Replacement project. The bridge crosses the Ohio River between Milton, Kentucky and Madison, Indiana. It opened in April 2014 and holds the record for the longest lateral bridge slide in North America. The innovative technique meant the bridge needed to be closed for just a couple of weeks, instead of the anticipated year-long process. Buckland & Taylor engineered a similar procedure on the Capilano River Bridge in West Vancouver in 2011.
Parsons’ Ottawa office has won the prestigious Gustav Lindenthal Medal from the International Bridge Conference for the Vimy Memorial Bridge. The award, recognizing “an outstanding structure that is also aesthetically pleasing,” will be presented on June 9 in Pittsburg, Pennsylvania. Designed by Parsons for the City of Ottawa, the bridge crosses the Rideau River at a location that is part of the Rideau Canal System, a National Historic Site and UN World Heritage Site. The bridge features triple tubular steel arches supporting a suspended deck using inclined hangars. It has eight lanes of traffic, including two bus rapid transit lanes, as well as bicycle lanes and pedestrian walkways.
Earlier this month, projects by CH2M in Mississauga, Ontario, and Entuitive of Toronto won international awards. Click here. 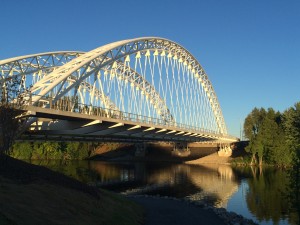 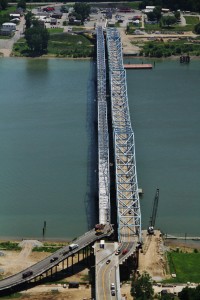 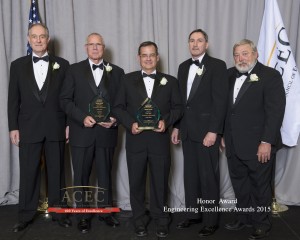 Members of Buckland and Taylor’s team receiving the Honor Award at the Engineering Excellence Awards Gala in Wahshington, D.C. on April 21, 2015 for the Milton-Madison Bridge replacement project.