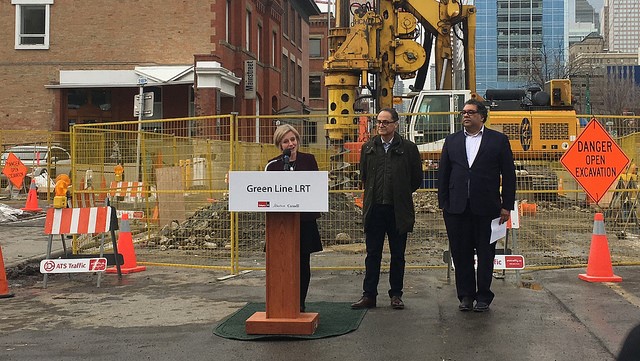 A funding agreement has been signed that officially gives the green light to begin construction on Stage 1 of Calgary’s new Green Line LRT.

The City of Calgary has already begun preparing the land that’s been set aside for the north-south Green Line, the most extensive single transit project in Alberta’s history.

When Stage 1 of the project is complete, the city estimates it will reduce C02 emissions by 30,000 tonnes, every year – the equivalent of 6,000 vehicles.

The final agreement struck between the Government of Alberta and City of Calgary locks in $3 billion in funding, with equal portions from the provincial and federal governments. The funding will flow over eight years to support Stage 1 of the project.

“This is another important step in bringing this project to life. The Green Line will be the biggest infrastructure project in Calgary’s history, providing critical connections and supporting our city’s growth,” said Calgary’s Mayor, Naheed Nenshi, in a media release.

On March 19, 2018 Calgary’s City Council approved the Design-Build-Finance (DBF) delivery model recommended by City Administration. A Request for Qualifications (RFQ) was expected to be released in Q4 2018, followed by a Request for Proposals (RFP) in Q1 2019. When information becomes available on bidding opportunities for the Green Line LRT, it will be posted to MERX and the Alberta Purchasing Connection (‘APC’) website.

Stage 1 is set to include:

Stage 1 is projected to begin construction in 2020, and is anticipated to open in 2026.