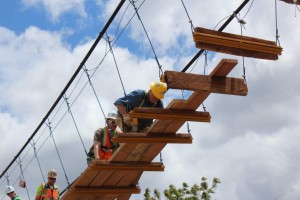 Engineers from Buckland & Taylor, along with other volunteers, work on a pedestrian suspension bridge for the Rio Abajo community in rural Nicaragua. 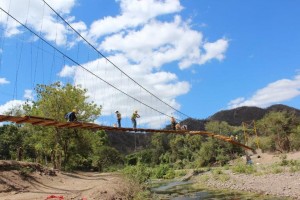 Engineers from Buckland and Taylor, along with other volunteers, complete work on a pedestrian suspension bridge for the Rio Abajo community in rural Nicaragua.

Engineers from Buckland & Taylor based in North Vancouver, spent two weeks in March building a new pedestrian suspension bridge for the Rio Abajo community of 3,000 in rural Nicaragua. The internationally known bridge engineering firm has been working on this project since 2014, partnering with non-profit group Bridges to Prosperity and Kiewit. During their recent trip they completed the bridge in just eight days,
The original bridge was destroyed by Hurricane Mitch in 1998 and since then the community has had limited access across a river to markets, secondary chools and health care services.
During the official opening ceremony, Don Bergman, Buckland & Taylor’s vice-president of major projects, said: “I’ve worked on many larger bridges around the world, but none have provided the sense of joy and satisfaction that the Rio Abajo bridge has.”
The four-person engineer team of Don Bergman, Hendrik Westerink, Terrence Davies and Kali Dickerson provided design review and construction. The firm also contributed financially to the project’s construction materials.