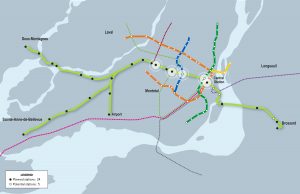 The organization’s infrastructure investment arm, CDPQ Infra, is planning to construct an automated, 20-hours-per-day LRT network that will stretch across the city and link with the existing metro, rail lines and buses.

Covering 67 kilometres, the “Reseau électrique métropolitain (REM)” will link downtown Montreal with the South Shore, the West Island, North Shore and the airport. The REM represents the largest public transportation infrastructure since the Montréal metro was inaugurated in 1966. It will be the third largest automated transportation system in the world after Dubai (80 km) and Vancouver (68 km), and just ahead of Singapore (65 km).

The line will have underground, at grade and overhead sections and will run along dedicated corridors, including the Highway 40 route to the West Island, which means that the trains – which will be fully automated – won’t be slowed down by freight trains. There will be 24 stations, with platforms 80 metres long and platform screen doors. The stations will be enclosed and climate controlled, and equipped with elevators.

The $5.5-billion investment is contingent on the federal and provincial governments providing around $2.5 billion, but CDPQ will hold consultations this spring and says it plans to issue requests for proposals by this fall. It will be Quebec’s first public-private partnership project.

CDPQ says the proposed network will help to relieve congestion not only on the existing transit system (one of the busiest in the world), but also provide relief on the city’s notoriously congested highways. Traffic jams in the Greater Montreal area are estimated to cost the economy $1.4 billion annually. By taking cars off the road, the network will reduce greenhouse gas emissions by an estimated 16,800 tonnes annually. And because the line will be electrified it will also help move transition to a low-carbon economy, as presented recently in its energy plan.

Macky Tall, president and chief executive officer of CDPQ Infra, said:  “Much work remains to be done, but today we are unveiling a state-of-the-art solution. With highly frequent service, 20 hours a day, universal access and Wi-Fi available throughout the network, the REM promises to improve the daily commute of hundreds of thousands of people. We are committed to delivering the project on-time and on-budget.”
CDPQ Infra plans to submit this project to the environmental impact public hearing (BAPE) process at the end of the summer of 2016. If all goes according to plan, construction is expected to begin in the spring of 2017 and the first trains will run in 2020.