British Columbia has more than 1,300 Level 2 charging stations, and 64 DC fast-charging sites, installed or in the process of completion.

The citizens of British Columbia will soon have access to 11 new public electric vehicle (EV) charging stations added to highway rest areas throughout the province, with eight of the 11 new locations being fast charging sites.

“Our goal is to build a seamless network of electric vehicle charging stations to make it easy and convenient for people to drive from one end of B.C. to the other, powered by clean energy,” said Claire Trevena, Minister of Transportation and Infrastructure, in a media release.

In addition to the 11 new charging sites, the Ministry of Transportation and Infrastructure supported the installation of two more BC Hydro direct-current (DC) fast-charging facilities at Britton Creek and at the Tofino-Ucluelet Junction. 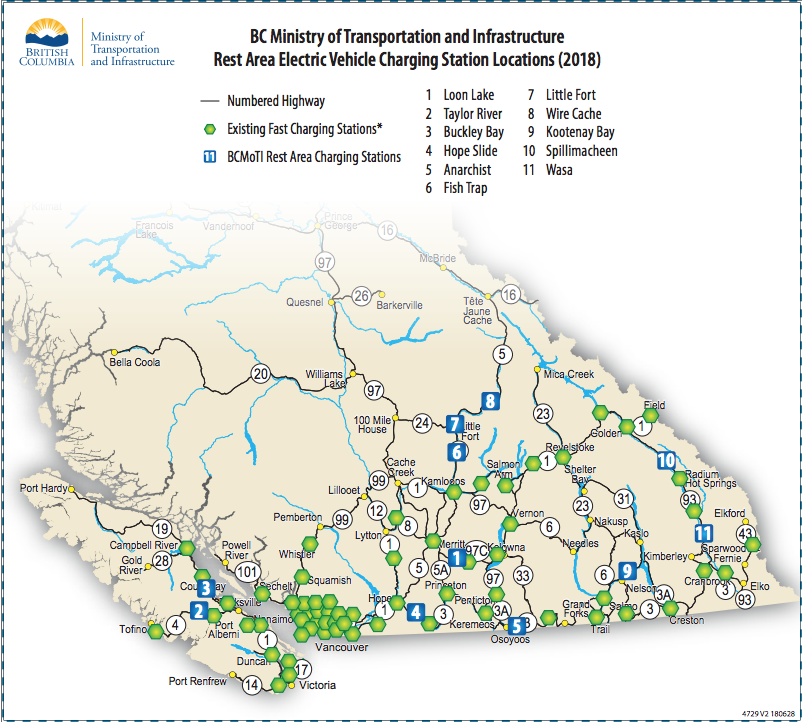 The eight new fast charging locations, two stations per site, will allow drivers to charge up in 30 minutes or less. The other three will provide Level 2 stations, supplying 240 volts of power, as part of the Accelerate Kootenays EV charging network co-ordinated by the Community Energy Association.

“As we work together to build a made-in-B.C. climate action plan, we must provide services that will support British Columbians to be able to participate in the transition to the low-carbon economy,” said Andrew Weaver, B.C. Green Party leader.

According to the release, an average EV driver will avoid producing at least four tonnes of greenhouse gas emissions each year, compared to a gasoline vehicle. EV drivers also save approximately $2,400 per year in fuel costs and maintenance.

“With its abundant clean electrical power, B.C. is a great place to own an EV,” said Bruce Sharpe, president of the Vancouver Electric Vehicle Association.

British Columbia has more than 1,300 Level 2 charging stations, and 64 DC fast-charging sites, installed or in the process of completion.

It is estimated that B.C. roads are home to over 10,000 electric vehicles, with popularity on the rise.