Funding for the initiative was allocated in Budget 2017 and design will commence this summer. 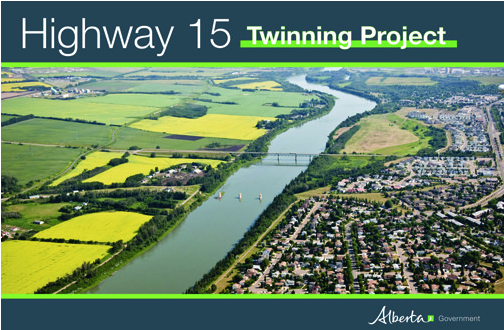 The Provincial Government of Alberta has committed to proceeding with its Highway 15 Twinning Project, funding for the initiative was allocated in Budget 2017 and design will commence this summer.

The project will include:

The government says that depending on factors like railway crossing improvements, utility relocation and land acquisition, construction could start as soon as 2019.

The route is an important service and trade corridor through the Industrial Heartland and a commuter route for thousands of Albertans. It is the only river crossing into Fort Saskatchewan, with one lane of traffic in either direction.

According to the province, since 2009, traffic volume on the two-lane Highway 15 bridge has increased by 50% and the growth is expected to continue. Vehicles cross the Hwy 15 bridge more than 23,000 times a day and congestion is an issue.

Because it is a narrow, two-lane structure, collisions often result in the bridge being completely closed to traffic for hours.

The project involves construction of a second bridge crossing the North Saskatchewan River at the southern entrance to the City of Fort Saskatchewan, improving safety and alleviating congestion.

“This project is one example of how our government is investing in the transportation network Albertans rely on every day. Twinning the Highway 15 bridge will reduce travel time for businesses and encourage economic growth. It will also help Albertans spend less time on the road and more time with their families,” said Brian Mason, Minister of Transportation, in a media release.