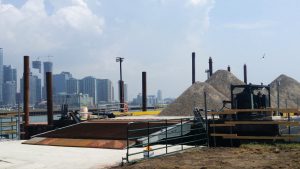 Aggregates are delivered to Billy Bishop Airport as part of a three-year program of runway repairs and upgrades. Photo: Ports Toronto.

Ports Toronto is celebrating the one-year anniversary of the opening of the pedestrian tunnel that links Billy Bishop Airport on Toronto Island across the Western Gap to the mainland at the foot of Bathurst Street in the downtown.

A recent study by Dillon Consulting has found that more than 90 per cent of travellers to the airport now choose to take the six-minute walk (by moving sidewalk) to the terminal rather than the ferry. As a result, the flow of passengers and traffic is much smoother, compared to previously when the travellers would arrive by the ferry in waves every 15 minutes. Engineering firm Dillon acted as technical advisor on the construction of the tunnel, with Arup doing the engineering design for PCL, the constructors. The tunnel is 10 storeys below the surface of the lake and incorporates a parallel conduit that carries new water and sanitary lines to serve residents and businesses on the island.

Meanwhile a three year project to rehabilitate the airfield is ongoing. Ports Toronto is replacing pavements and lighting for the runways, taxiways and apron. It is also converting one runway into a taxiway with a ground run-up enclosure that will help to reduce the noise from aircraft engine maintenance. WSP is consulting engineer for the planning, design and construction phase.

The airport is so close to downtown it has frequently run into opposition from local residents over plans to expand it. Though some of the current construction activity has to take place at night when planes are not landing, Ports Toronto has taken measures to reduce the noise and nuisance. In order to reduce the traffic through the Bathurst Quay Neighbourhood, for example, most of the equipment and materials are transported to the site by barge from the cruise ship terminal in the Port of Toronto, and then stored on a temporary dock on the east side of the airport.