The announcement is the last step before the official start of the project. 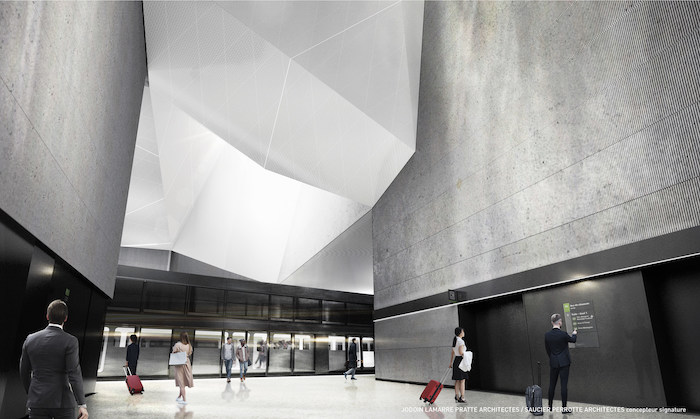 The announcement is the last step before the official start of the project (rendering pictured), which sets out to improve intermodal transportation and access to the airport site. Under the contract, the 50-50 partnership will act as general contractor and construction manager (GC/CM) and a key collaborator with ADM, with a mandate that includes construction, project management and commissioning of the station shell and its associated buildings, so as to allow REM to install its equipment and begin operating the station.

“This project will allow YUL to join the network of major airports that benefit from a sustainable, efficient link to their city centre,” says ADM president and CEO Philippe Rainville. “We are pleased to be accompanied in this journey by firms that have solid expertise in carrying out similar projects.”

“The Montreal-Trudeau International Airport REM station is a significant addition to the REM network, which we are also currently playing a key role in executing,” says Aecon president and CEO Jean-Louis Servranckx. “We look forward to working with ADM and our partner on this landmark project.”

“We are pleased to continue our work with ADM on the realization of this important project by leveraging our civil engineering and building expertise with Aecon,” says EBC president and CEO Marie-Claude Houle.

The contractual financial closing and the start of construction by Connect Cité are scheduled for the first quarter (Q1) of 2022. The terms and conditions associated with the project will then be reviewed in co-ordination with REM and its general contractor.