Restoration of the Blackfriars Bridge, first designed in 1875, includes removal of the bridge from its supports followed by off-site rehabilitation of the superstructure. 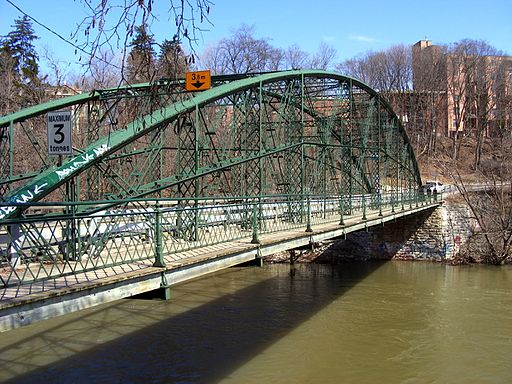 The city of London, Ontario has announced that preparations for rehabilitation of Blackfriars Bridge are now underway. City staff and consultants are recommending approval of a heritage alteration permit application. The permit proposes returning the Blackfriars Bridge, as much as possible, to its original 1875 design.

The City of London retained Dillon Consulting Limited to complete a Municipal Class Environmental Assessment (EA) study to evaluate alternative solutions for the future use of the Blackfriars Bridge.

The rehabilitation of the bridge will require removal of some of its 1950s additions and replacement of the 1980s deck and vehicular guards, a city news release also states that current requirements of the Canadian Highway Bridge Design Code will need to be satisfied.

“Removing the bridge and performing its restoration off site has many benefits,” said Kelly Scherr, managing director of environmental and engineering services and city engineer, in the news release.  “Not only can work continue indoors through the winter months in a controlled environment allowing for increased quality of work, there will also be reduced worker/public safety concerns.”

The lift of the bridge in its current state and placement of the rehabilitated bridge back on its supports will be performed using a crane on Blackfriars Street immediately west of the bridge.  The bridge is anticipated to be moved this fall.

Dillon Consulting handled the structural investigation including, testing, evaluation, and risk treatment analysis; the EA that included analyzing traffic operations, flood risks, pedestrian/cyclist access to the Thames Valley Parkway and maintenance of the heritage value. The company also did the preliminary and final bridge designs including base plan preparation, drainage design, utility coordination, landscape architecture for the modifications to Ridout Street and improvements to the cross ride intersections with the Thames Valley Parkway.