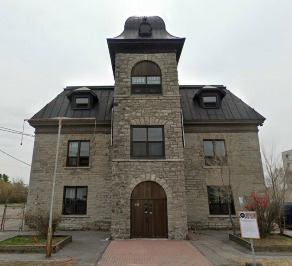 The school was its region’s first ‘high school,’ serving as an English-language transition facility from public school to college and university. A square bell tower was added in 1911, while a fire in 1925 led to the replacement of the original roof with a mansard style and the addition of a third floor. More recently, the building housed the Western Quebec School Board, until a zoning change in April 2019 meant it could be turned into a seniors’ residence.

This adaptive reuse project was overseen by Luc-Alexandre Faucher, ing., of L2C Experts Conseils en Structure and Sam Pouliot of Neuf Architect(e)s, while the installation of the Cintec reinforcement system for general wall strengthening was performed by Andre Pare of Paranis Construction.