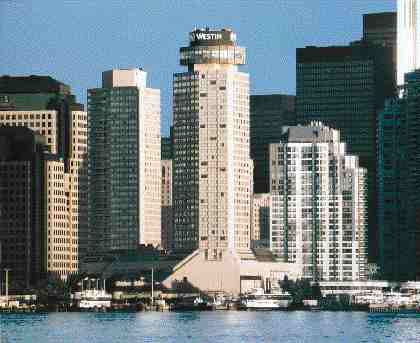 The Westin Harbour Castle Hotel is a prestigious hotel/conference centre complex at Harbourfront in Toronto. The complex includes two towers, 34 and 35 storeys high, four common service and convention levels, parking, and a separate two level Conference Centre connected by bridge over Queen’s Quay Boulevard. Above the south tower is a revolving restaurant with an awesome view of the City of Toronto. The Toronto Island Ferry terminal is located literally in its backyard.

The building was scheduled for a major facelift and the owners decided that life safety improvements should be implemented at the same time. The original Edwards 6500 fire alarm system was considered state of the art in 1974 when the building was built. It still provided for basic fire protection needs but components had aged, there had been numerous modifications including a separate interfaced paging system, and it was not as flexible as necessary to meet contemporary operating needs.

As well, although the lower levels of the building complex and some areas on each floor were provided with a sprinkler system, the guest room corridors and rooms were not sprinklered. The owners decided to add sprinklers to the entire building.

Although the life safety retrofit was considered a separate project from the main renovation, it had to be coordinated with the other work. Approximately five floors could be taken out of service at any one time and renovated. This freedom is a rare luxury when replacing life safety systems in occupied buildings.

Although there was free and unobstructed access to floors being renovated, there were complications. Scheduling was tricky to say the least. Each floor or group of floors were available for only a short and predetermined time period. The completion of renovations had to be followed by interim inspections by the Ontario Fire Marshal’s Office, and then by the Toronto Fire Services as well.

The new system core hardware, consisting of a Display and Control Centre (DCC), transponders for data gathering and control, and interconnecting network wiring, was installed before the retrofit of field devices began. Transponder and display/control nodes are configured in domains which are interconnected to form a fire alarm system network. If the main network fails, full operation continues within the domains. If the domain fails, each transponder continues in operation for its area of coverage.

The conference centre is a separate building but emergency response is by the same staff as the hotel. The fire alarm equipment in the centre operates as a separate domain which reports information on a local DCC and on the DCC at the central alarm and control facility in the hotel. This arrangement allows the operators to have full, network-wide knowledge of the status of the conference centre life safety system while allowing the centre to be operated virtually independently.

The existing paging system, existing fire alarm system and new fire alarm system were all interconnected for seamless operation before any field devices were removed or replaced. This interconnection allowed an operator to simultaneously select old and new equipment and devices for paging without selecting any special switch or function. Operators did not have to be concerned with the current retrofit status during an emergency.

Complications resulted from the fact that the original system used bells for alarm signaling and separate speakers for paging. The new system provides only for speakers which serve to give both alarm tones and emergency messaging.

It is essential to have continuity in the alarm signaling and system operation since the retrofit is taking place over a two to three year period. Therefore, we recorded the sound of the existing bells, then digitized and converted it to a “wav.” file. This file was then used as the tone which is sent out over the new system speakers if an alarm is initiated. In most cases it is not possible to determine if a bell or speaker is providing the alarm bell sound.

As well, the existing bell circuits are vertically wired. Naturally the circuits had been staggered such that installers were never able to align the floors under renovation with the exact floors connected to a specific bell circuit. This existing arrangement meant we had to maintain a continuous bell circuit even though a floor no longer employed bells. Otherwise all signaling to other floors served by the same circuit would be lost.

We provided smoke alarms in each guest room, and the hotel operators also wanted a separate alarm indicator for each room displayed at a common location. We met this need using addressable “system” smoke detectors mounted in special bases. Once a detector is activated it triggers its own in-room audible signaling device (building alarm signals are not activated) and transmits a message to the fire alarm system network. The smoke detector status then displays on all annunciation devices on the system.

Installation is complete in one tower, and work is under way on the second. So far the fire safety system has proved itself up to the task. CCE