Jury Comments: “Demonstrating “the small community that could ... and did, “this municipal library is proof that net-zero buildings can be achieved at any scale while making no compromise in the design. Visits to the library have doubled since it opened, and it serves as a model and inspiration for the citizens and the engineering profession. ” 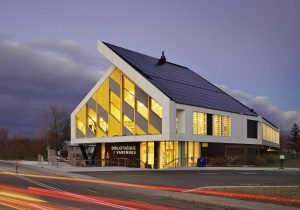 The City of Varennes in Montreal’s south shore wanted to give its residents a new, modern, and welcoming library that promoted access to information and culture.
Stantec designed the electromechanical and structural systems, and carried out the civil engineering for this net-zero consumption building. Located on the site of the former library, the new structure is one of only about 10 buildings across Canada that produce as much energy as they consume, and the City of Varennes is the first in Quebec with a net-zero institutional building on its territory. The library serves as a model for sustainable development and shows that ambitious construction choices are now more accessible than previously imagined.

Building energy efficiency (low consumption)
The major challenge for Stantec’s team was to design the energy-efficient systems to achieve the net-zero objective, or “energy production–consumption = 0 kWh.” Before the installation of solar photovoltaic panels (for energy production), the building had to be exceptionally energy-efficient (low consumption).
Given Quebec’s extreme weather conditions, the task was complex. The first step was to reduce the demand for energy through the overall design. Spread out on two floors, the building has an elongated shape and reduced depth, which provides optimal light penetration and cross ventilation.
Stantec recommended a system with water-source geothermal heat pumps, combined with eight 152-metre-deep geothermal wells. Hot/cold radiant flooring and high-efficiency variable-speed fan-coil units maintain comfort levels while obtaining an optimal power coefficient for the heat pumps.
The incoming outside air for oxygenation is mostly heated and humidified by a heat wheel. This strategy ensures that most of the heat and humidity contained in the air exhausted from the building is recycled for the fresh air. The heat wheel makes it possible to reduce outside air heating and humidification needs by more than 70%. In addition, the incoming outside air is preheated by thermal energy generated by the photovoltaic panels installed on the building’s roof.
The design minimizes the need for artificial light. The windows have superior energy performance and each office or zone has an occupancy sensor. A weather station is located on the roof to provide exterior data to a centralized DALI (digital addressable lighting interface) control system, so that lighting levels can be adjusted according to outside conditions.
Thanks to the above systems, the building’s energy consumption is only 25% that for a building of comparable usage and scale. It thereby achieves an energy consumption level that is 75% below that set by the Model National Energy Code for Buildings (MNECB).
The team carried out multiple simulations before selecting the definitive HVAC design. Running simulations for a building in order to obtain its energy behaviour details, for every hour in a year, facilitates an analysis of the building’s global operation and reveals interactions between building components.

Source of inspiration and pride
Having obtained LEED Gold certification, the design includes many other sustainability features, including the fact that it was built on the same site as the former library (reduction in carbon footprint by 953 m2). It has a permeable parking area with honeycomb grass paving, retention ponds for surface runoff water, and electrical vehicle charging stations.