May 1, 2011
by Canadian Consulting Engineer 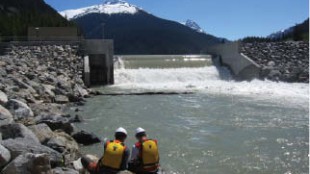 Americana 2011 was held in Montreal on March 22-24 at the Palais des Congrès. Consulting engineering firms were well represented, with Golder and AMEC acting as key sponsors. Firms such as Genivar, Dillon, BPR and TetraTech also had people making presentations.

One session that stood out was “Water Supply and Sanitation in Natural and Manmade Disasters.” With the triple disaster in Japan under way and the Haiti earthquake and Asian tsunami still being dealt with, questions about providing water and wastewater infrastructure to people suffering under such dire circumstances struck a chord.

Presenter Caetano Dorea, P.Eng., a young academic from Laval University who has worked for Oxfam and spent time in Aceh after the 2009 tsunami, said that analyses show that in most disasters the priority should be to deliver a larger quantity of “good” quality water, rather than labouring to provide a smaller stream of “excellent” quality. Units such as reverse osmosis or ozone chambers therefore aren’t the best immediate answer: “If it looks complicated, it probably is complicated, and it will be expensive,” he said.

While there are many solutions for providing clean drinking water in emergencies, efforts to provide technologies for clean sanitation are “lagging far behind,” said Dorea. “We’re looking for the holy grail in terms of sanitation technology.”

Consulting Engineers of B.C. handed out its 2011 Awards for Engineering Excellence at the new Vancouver Convention Centre on March 5.

Jack Lee, P.Eng., president of the association, pointed out that B.C.’s engineering sector contributes $2 billion contribution to the economy.

Engineers Canada released a labour market study on April 11. Chantal Guay, P.Eng., chief executive officer of the Ottawa-based organization, said that Engineering Labour Market Conditions 2009-2018 will benefit many groups, including students and human resources departments, “as it identifies which disciplines and areas of the country will need engineers in the next seven years.”

According to the news release, the study results suggest that “while levels of immigration and Canadian graduation established in 2008-2009 are likely sufficient to balance markets across the coming decade, issues such as replacement demands related to retirements in many occupations will add to current challenges in recruiting experienced engineers.”

The report found that on balance the supply of civil engineers wi Richard Lay ll fall from now until 2018, a factor which is related to the aging workforce and “relatively low registrations in post secondary programs compared to other disciplines.” It noted that the age profile of civil engineers is older than the average for all engineers.

The report, prepared in association with Randstad Engineering, can be downloaded free at www.engineerscanada.ca

SNC-Lavalin launched its 100th birthday celebrations in April. At a media conference on April 11, president and CEO Pierre Duhaime explained how the company had started off in 1911 as a one-man, one-client office in nearby Old Montreal.

Now the company has grown to be “one of the world’s largest engineering/construction firms” with 24,000 employees in Canada and 35 other countries around the world. It currently has “thousands of projects in 100 countries,” and earned revenues of $6.3 billion last year.

A “travelling hard hat” is criss-crossing the globe to different offices for “photo-ops.” The company is also publishing a centennial history book.

But the major initiative is “100 Acts of WE CARE.” With this program, the company will recognize 100 examples of employees volunteering their time to any of a variety of causes.

Golder Associates has acquired the Marston Group of Companies, a company of 80 employees that specializes in services for the mining sector. Staff will join the existing Golder offices in Denver and Calgary, while keeping U.S. offices in St. Louis, San Antonio and one in Australia.

Trow Global of Brampton, Ontario has renamed itself exp Global inc. The name change affects 25 companies Trow recently acquired, including ADI of New Brunswick, Newfoundland and Labrador Consulting Engineers, and Teknika HBA and LBCD of Quebec. Companies in Ontario that are affected include Banerjee & Associates and Carruthers & Wallace.

Canada’s National Building Code and National Plumbing Code may include a water use efficiency objective in the future. The NRC Canadian Commission on Buildings and Fire Codes has set up a steering committee and is working with a consultant on policies and directives. A decision on whether to proceed is expected to be made by this summer.

Parks Canada has launched a new website, the Canadian Register of Historic Places. The website includes engineering works and structures, as well as buildings, and archaeological sites. It is believed there are 17,000 eligible designated sites in Canada that could be included. See www.historicplaces.ca

In the U.K., the government has announced the details of a feed-in-tariff program for a variety of renewable energies, including ground and water source heat pumps. The Canadian Geo-Exchange Coalition says that it has been raising the possibility of a feed-in-tariff for geo-exchange systems with provincial ministries across Canada.

Size Matters to Some

The number of buildings 200 metres or more in height around the world has risen from 286 to 602 in the last decade. Currently buildings over 200 metres exist in 32 countries across the world, including the UAE which has 44 such buildings.

The Council on Tall Buildings and Urban Habitat (CTBUH) located at IIT in Chicago keeps careful tabs on the world of rising structures.

The council also notes that these figures do not include a number of buildings that are projected to be completed in 2011, such as the Wenzhou Trade Center in China.