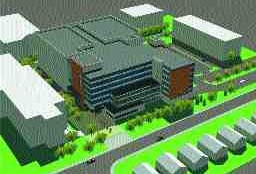 Both the University of Toronto and the University of Alberta have announced plans to build large new facilities for their electrical and computer engineering departments. Both universities intend to double their enrollment in the information technology area at both graduate and undergraduate levels in order to keep up with the expected huge demand for engineers in this field in the next century. Provincial government financial incentives are providing funding help through the Access to Opportunities Program in Ontario, and the Access Fund in Alberta.

The University of Alberta Faculty of Engineering is planning two buildings joined by an atrium. The $24 million Engineering and Computer Engineering Research Facility (ECERF) will have research laboratories and staff and student offices. Consultants on the project include Stantec (electrical), Hemisphere (mechanical), with Cohos Evamy as architect and structural engineer. The second phase is an Engineering Teaching and Learning Centre. By the time the buildings are finished in 2004, the university’s faculty of engineering will be the largest in Canada, with 3,400 undergraduates, 750 graduates and up to 170 faculty.

The University of Toronto’s expansion is not so large, but it will be comparable in size and scope to the top information technology departments in universities such as Illinois and Berkeley in the United States. It will eventually have 1,400 undergraduates and 450 graduates.

Its new Centre for Information Technology is located off St. George Street in the downtown campus, west of the Faculty of Applied Science and Engineering. The new 32,000 square metres of space will include four industry-sponsored research centres (Nortel and Bell Canada), laboratories, clean rooms, lecture halls, offices and meeting rooms. The consulting engineers on the project, which is set to start construction next year, include Read Jones Christoffersen (structural), Keen Engineering (Mechanical) and Crossey Engineering (electrical). The architect is A.J. Diamond, Donald Schmitt and Company.