Planning and design were fast-tracked. 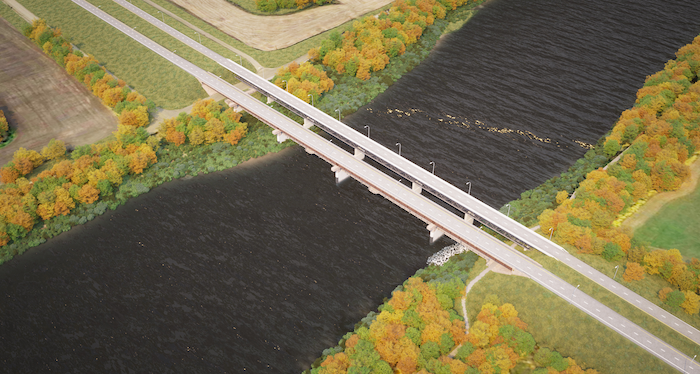 The twinning of Highway 15 near Fort Saskatchewan, Alta., is adding a new 330-m long highway bridge and architectural underslung pedestrian bridge over the North Saskatchewan River, along with roadway, retaining wall and other bridge work on both sides of the river.

Planning and detailed design, completed in 2019, were fast-tracked to address heavy congestion and safety issues for this strategically important corridor between Edmonton and Alberta’s Industrial Heartland. AECOM’s Edmonton team served as prime consultant and delivered the design within just 14 months by working collaboratively with stakeholders. Projects of this magnitude typically take upward of three to four years to plan and design.

Alberta’s ministry of transportation challenged AECOM with the aggressive schedule, which called for an innovative approach to project management and risk management. Both parties realized the traditional planning and design process needed to be modified to reduce timelines without compromising on technical attention to detail and reporting requirements. The project relied upon regular discussions with the City of Fort Saskatchewan, Sturgeon County, the River Valley Alliance, utility companies, regulatory agencies, CN Rail and private landowners.

The need for improvement

The twinning of Highway 15 will provide wide-reaching and long-lasting benefits for Albertans.

Improved access will help support the economic growth of the region, where planned development includes two multi-billion-dollar petrochemical facilities. Reduced travel times will benefit not only commuters to the Industrial Heartland, but also agricultural producers and businesses across Fort Saskatchewan, Sturgeon County and Strathcona County.

Indeed, the project is important for the efficient movement of goods and people throughout the entire Alberta Capital Region and beyond, which is why the provincial government fast-tracked its delivery.

The existing river bridge carried just one lane of undivided traffic in each direction, resulting in a significantly substandard level of service, given the volume of 23,000-plus vehicles per day—more than 50% higher than in 2009 and continuing to grow.

In the past, collisions often resulted in the entire bridge being closed to vehicles, which made for long lines of traffic, with no nearby alternative for crossing the river and restricting access for emergency services. The twinning will improve safety and reduce the disruption caused by accidents.

The underslung pedestrian bridge, meanwhile, will provide an important link for pedestrians and cyclists between an existing trail network within Fort Saskatchewan and a recently constructed trail that runs along the west side of the river in Sturgeon County.

The roadway’s vertical alignment design was very challenging to meet the clearance requirements of the existing overpasses on both sides of the river and the freeboard to the underslung pedestrian bridge. This challenge was addressed with an innovative superstructure arrangement, with tapered girders along three of the five spans.

With the pier locations selected to optimize the structural efficiency of the tapered superstructure, the piers were positioned away from the deepest portion of the river. This would reduce the project’s in-stream work, construction risk, scheduling, costs and environmental footprint.

Technical innovation also extended to a number of the bridge details, including casting the deck expansion joints into position after all joint rotations to better support superimposed dead loads and significantly reduce structural fatigue for the joint fingers. The slender structure of the underslung portion, meanwhile, was designed to mitigate vibrations and resonance.

On the east side of the river, the highway’s design was widened from two to four lanes within a constrained urban corridor. Soil nail retaining walls were specified from the top down to retain the fills at the abutments of two city bridges. This design concept meant theses bridges could be kept, rather than replaced, thus reducing the project’s cost and impact. 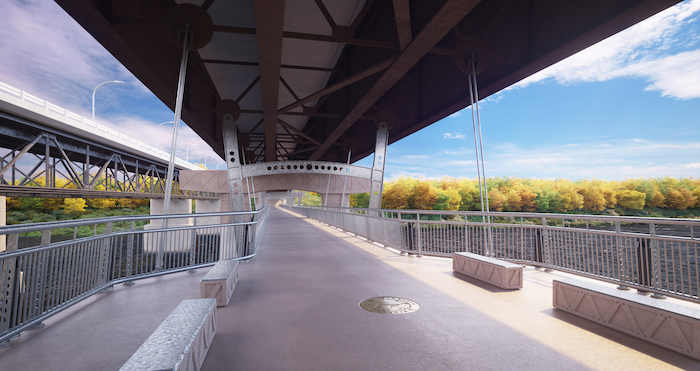 The project includes a pedestrian bridge, to be illuminated at night.

The most significant environmental impact identified was constructing the new river bridge piers, which use earthen berms for access. The design team was conscious to minimize the number of permanent piers in the river compared to the existing bridge, to reduce permanent habitat loss for fish. The team also specified minimal construction and materials to limit turbidity during berm installation.

Further, the underslung pedestrian bridge will offer a sustainable transportation option over the river for cyclists and pedestrians and provide a key connection for the River Valley Alliance’s ‘Ribbon of Green’ vision, which calls for a continuous network of river valley trails from Devon to Fort Saskatchewan.

Construction is expected to finish next year.

Reducing construction risk was another key goal. This was achieved by prequalifying general contractors, based on the specific attributes required for the project.

In addition, AECOM ensured all utility crossing agreements and environmental permits were secured prior to the awarding of the construction contract and mitigations were in place for risks during construction, such as scour of the existing bridge piers.

Dan Morin is a project manager for AECOM. This article originally appeared in the March/April 2021 issue of Canadian Consulting Engineer.