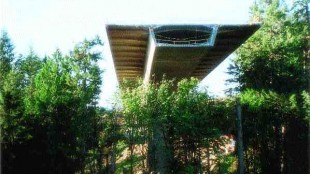 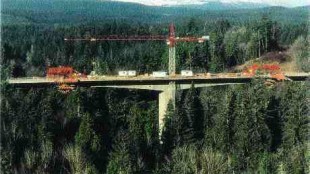 Two complete bridge designs, one in concrete and one in steel, were prepared for the 400-metre long, 54-metre high crossing of the Tsable River Valley on Vancouver Island, British Columbia. Located near Courtenay, the bridge carries the new four-lane Vancouver Island Highway across the pristine, heavily vegetated valley.

Interestingly, the decision to prepare a concrete design was somewhat reluctantly made. It was perceived that this was clearly a “steel” crossing due to the high seismicity in the location coupled with the substantial height of the bridge. However, at $15.3 million, the concrete design was the lowest of six bids received. That design was successfully constructed on schedule (completed in June 1998) and under budget.

In addition to dealing with seismic conditions and economic considerations, the designers had to minimize the impact of the construction of this major bridge on the local habitat. An old-growth forest of Douglas Firs fills the valley, some of the trees reaching above the roadway level of the bridge. Moreover, the river flowing along the valley bottom is a vital salmon resource. There was a limit imposed on the cutting of trees, and the construction had to avoid disturbing existing river features such as log jams which form important local fish habitats.

Compounding the difficulties, the valley sides are very steep and the terrain is potentially unstable. Construction access was not easy, but despite this the bridge had to be built in two years.

Environmental agencies placed restrictions on the location of the bridge foundations. These limitations, together with the steep terrain and potential instability of the ground, made selecting the optimum pier locations and span arrangements very difficult.

The chosen design has long spans to minimize the number of foundations. Also it could be built above and independently of the valley below. A four span arrangement of 82, 118, 118 and 82 metres was identified as the best solution. The team also investigated various forms of superstructure construction. These included cable-stayed box girders, cellular arch configurations, launched concrete box girders and launched trapezoidal box girders. The last option was chosen as being the most economical. Built by the cast-in-place segmental, balanced cantilever method, the superstructure construction could proceed well above the sensitive valley slopes and river, and have little or no impact on the valley throughout most of its length.

Given that this tall concrete structure is in an area of seismic activity (peak ground acceleration 0.33 g) the team exploited every opportunity to reduce the superstructure’s weight and found that a single-cell configuration would be most economical. It is one of the largest single-cell box structures in North America.

Having eliminated a central web wall, the amount, and hence weight, of concrete in the superstructure was further reduced by incorporating stiffening ribs into the undersides of the deck and deck cantilevers. The latter are substantial, measuring 6.5 metres long.

The use of post-tensioned concrete in a single-cell box girder bridge results in a structure which is inherently very durable and will require less maintenance than steel. Moreover, using single cell as opposed to the more typical double cell construction simplified the construction.

Designing and building this major crossing with the associated environmental, geotechnical, seismic and site topographical constraints was a major challenge. The design of the superstructure had to account for secondary effects, including complex creep and shrinkage movements associated with the segmental, time-dependent nature of the construction. During the building phase it was important to carefully monitor the deflections of the cantilevers and to calculate compensating formwork settings in order to ensure that the cantilevers met at the centres of the spans.

Since the project was completed, any vegetation which was affected has begun to grow again and the bridge harmonizes well with its surroundings. Ironically, the environmental success of the structure prevents its aesthetic success from being fully seen. An observer cannot appreciate the scale and slender beauty of the crossing in its entirety because too many of the tall trees remain and prevent an overall panoramic view.