Usually, it is only in dreams that one does such things as climb mountains in Nepal and meet a crown prince for tea. But Walter Dilger, P.Eng. regularly makes his dreams reality. Despite having reache... 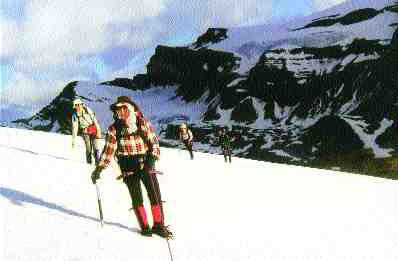 Usually, it is only in dreams that one does such things as climb mountains in Nepal and meet a crown prince for tea. But Walter Dilger, P.Eng. regularly makes his dreams reality. Despite having reached the supposedly retiring age of 65, serving on the faculty of civil engineering at the University of Calgary, and doing consulting work on such notable projects as Confederation Bridge in P.E.I., he finds time to ascend many heights and incarnate many dreams. And not just in Nepal.

Even his reasons for coming to Canada have a little romance in them. The Rockies, majestic yet navigable in his mind, were, he says, a big draw when he decided to leave the Otto-Graf Institut in his native Germany in 1966 and move to Alberta with his wife and three children (they now have five). He became a respected expert in the field of pre-stressed concrete, the winner of major awards and author of several books on the subject. Like many engineers, Dilger is a sort of explorer, inventing principles to solve physical and technological problems. However, Dilger’s exploration extends well beyond his job.

His experience in Nepal last year took him first to a teaching stint at the university in Katmandu, then up into the mountains in difficult climbing bursts, once ascending 1,200 metres in an afternoon, then putting 25 kilometres behind him in a single day. It was in Mustang, a remote kingdom near the Tibetan border, a place populated by Buddhists where few tourists ever go, that he met the crown prince, had tea with him, and heard of his majesty’s desire to keep his remarkably happy subjects content in a world of medieval technologies and pack-animal transportation.

“I was reasonably well conditioned,” Dilger says modestly of the stamina he needed for Nepal. But then he’d had recent practice. “I climbed Mount Fuji two weeks earlier,” he adds. “We started at sea level at seven o’clock in the morning and within 20 hours we were on the top. That’s almost 4,000 metres. The elevation gain was just about the limit I could take. I felt very tired and exhausted coming to the top.”

He wasn’t too tired to try more adventures this year. In August he followed the dreams of late 19th-century Gold Rush romantics by ascending the Chilkoot Pass from Skagway, Alaska to a point past the highest elevation. He took a few of his children and their spouses, which he often does when travelling in Canada.

Other trips have taken him to Egypt to see the pyramids, Alexandria and Thebes, twice to China (where the building boom in Shanghai astounded him), and of course up the West Coast Trail in British Columbia and to many Canadian national parks. He plans to get to South Africa, follow the Inca Trail in Peru (and “see how they solved engineering problems a few thousand years ago”), trek the entire Trans-Canada Trail, and explore the wilds of Newfoundland.

Remarkable energy and abiding curiosity compel him to such places. But there are also motivations closer to home. He finds that treks with his family present opportunities truly to talk with his children, one on one, undisturbed by the formalities and hubbub of holiday get-togethers.

And in the midst of his exotic adventures, while fulfilling his dreams and facing extraordinary physical challenges, Dilger’s engineering mind keeps working. “I was thinking,” he says, “I should go back to Nepal and develop some things which are suitable for their bridge problems. They have these very deep gorges and with modern technology one could span, say, 200 or 300 metres in a very inexpensive way for their pack animals and maybe even for vehicles.”

He might even introduce the idea during tea with the crown prince.