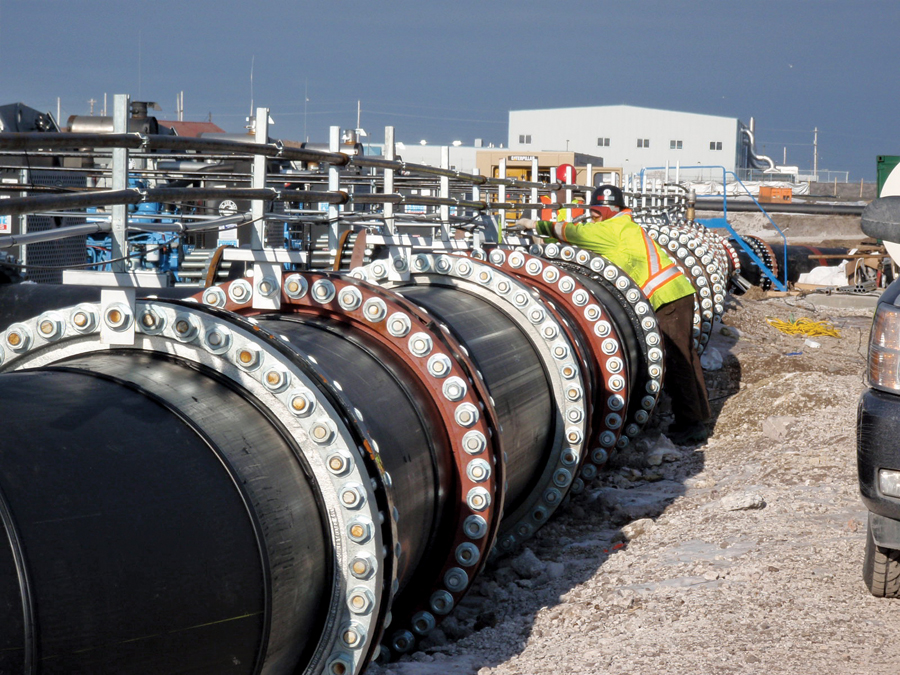 Above: 4-ft. diameter discharge pipes in the bypass pumping system at the Tar Ponds site; the system operated around the clock for four years.

“A contaminated site that
has been a very large issue
for a significantly long time
has a solution that allows
the land to be given back
to the community. This
is a model for future
clean-up projects.”

The Sydney Tar Ponds in Sydney, Nova Scotia were the result of over 100 years of steel production. The process of turning coal into coke (used for steel production) had left behind polynuclear aromatic hydrocarbons (PAHs), volatile organic compounds (VOCs), polychlorinated biphenyls (PCBs), mercury and other heavy metals. What remained in the heart of Sydney was one million tonnes of contaminated soil and sediment spread over three major sites — the North Tar Pond, the South Tar Pond, and the former Coke Oven sites.

Spanning a total of 100 hectares, this was Canada’s largest and most complex urban contaminated site. There had been two previous attempts to design and implement a remedial solution which had failed. Then, in 2006, the Sydney Tar Ponds Agency, an implementing agency formed by the Province of Nova Scotia and the Government of Canada, engaged a team led by AECOM to perform detailed design engineering and construction oversight on a $400 million remediation and site restoration project.

Remediation and treatment addressed approximately 750,000 tonnes of sediment contaminated with coal tar and other pollutants such as those mentioned above. This took place in a marine estuarine environment connected to Sydney Harbour.

The results have been called “the signature Federal Canadian Contaminated Site Remediation Project.”

Solidification and stabilization in a marine environment

The following are among the technical achievements:

• site specific procedures were developed to test the toxicity of leachate from the S/S remedy;

• compressive strength parameters in the solidified material were developed, assessed, and customized to ensure that the remediated site would allow for the future use of the land for building, development, recreation and other community use;

• intensive modeling of ground and surface waters was done for hydraulic conductivity to ensure a preferential deflection of ground waters on the site.

The remediation also included one of the largest water control and management systems amongst remediation projects in Canada and abroad. The control system, involving steel sheet pile intake and outflow structures, diesel and electric pumps, and four x 4-ft. diameter discharge HDPE pipes, allowed the coal tar contaminated sediments to be treated in the dry. The system controlled any water intrusion from the ocean through Sydney Harbour and captured and pumped incoming streams sequentially around the working areas.

On the large 100 hectare site, which has materials of variable depth intermingled with large quantities of debris and with variable chemical and moisture content, construction activities needed to be carefully and precisely managed.

This high profile project required the rigorous management of stakeholder and community relations. Stakeholders included the federal and provincial governments, as well as local governments, organizations, businesses and members of the community.

The project required extensive quality control and quality assurance measures. To control the air and odour emissions, for example, required a high rate of treatment and processing.

Now that the remediation is complete, brownfield development is underway and the STPA plans to transform the site into urban parkland. The park will include public art, walking trails, bike paths, a sports field, an amphitheatre and several lookout points, by late 2013.

In 2008, a feature story on a pilot program for the solidification and stabilization’s technical design was voted the “Discovery Channel’s feature story of the year.” cce