The use of Building Information Modeling is taking off in Canada and around the world. It has many advantages, but for engineers it’s not all smooth sailing yet. 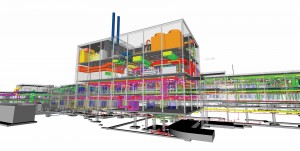 If you haven’t been asked to use BIM on a project yet, you will be.” says Ian Trudeau, C.Tech, an associate at Entuitive, structural engineers in Toronto.
“If you aren’t BIM capable,” he says, “you better believe the large competing international firm is, and they are just waiting to take your business.”
Building Information Modeling (BIM) is revolutionizing how buildings, infrastructure, and utilities are planned, designed, built and managed. The most common BIM program in Canada is Revit from Autodesk. BIM takes things beyond the traditional 2D model to an interactive 3D model that all members of the team have access to.
Large public projects across Canada of every type, from LRTs, to art galleries, large hydro plants and urban developments, have been designed using BIM.
“It’s a myth that BIM hasn’t been adopted readily in Canada,” says Thomas Strong, managing director of CanBIM. “It’s been growing in popularity over the past decade, and is soon to become the industry standard.” Along with CanBIM, BuildingSMART Canada and the Institute for BIM in Canada are leading the way for this change.
The technology is uniquely suited to address current challenges in our country, says Sheryl Staub-French, associate professor of civil engineering at the University of British Columbia. She specializes in researching BIM and is on the technical advisory board of BuildingSMART Canada.
Staub-Fench explains: “The construction industry faces significant challenges to meet the demand for growth and renewal of the built environment, to meet increasingly aggressive sustainability targets and to meet severe economic constraints. BIM, coupled with more integrated project delivery methods, has the greatest potential to transform industry practices to meet these challenges.”
“For example,” she adds, “the U.K. government is now mandating BIM on their projects as part of their strategy to create a low carbon construction industry.” The U.K.’s goals include a 50% reduction in the initial cost of construction and the whole-life cost of built assets, a 50% reduction in the time from inception to completion, and a 50% reduction in greenhouse gas emissions in the built environment.

Advantages of BIM
Trudeau explains that Entuitive uses BIM on all their major projects. whether it’s required or not. “The discussion focuses on how we will contribute to and use the model rather than who is using BIM and who is not. We’ve found that developing a BIM execution plan at the kickoff is a good way of documenting this type of discussion.”
He says that BIM capability isn’t necessarily tied to the size of the firm, as smaller firms can push for innovation, whereas some larger firms stick to the more traditional 2D CAD approach.
“BIM models also have a number of uses that are starting to pick up traction in the industry, including scheduling, cost estimation and energy modeling,” says Geoff Hempel, P.Eng., a senior project engineer at MMM Group in Toronto. “And once construction is complete, the facility management possibilities are astonishing – from preventative maintenance, and spare parts, to recommissioning, energy conservation and load-shedding.”
Using BIM can have many advantages, agrees Trudeau, such as reducing time dealing with errors and omissions. It can also reduce on-site labour costs by encouraging more prefabrication through enhanced coordination.
In addition, design intent can be communicated more effectively and clearly using 3D views, reducing the number of changes and corrections needed on site, says Trudeau: “This is where I see consultants getting the biggest bang for their buck.”
“It forces us to do a thorough coordination review with other disciplines early on,” says Hempel. “This enhanced understanding tends to save rework later on and typically results in fewer RFIs and changes in the field during construction.”
It also reduces potential disputes between the design teams, contractors and subcontractors, says Strong, because everyone is on the same page. It reduces risk, for example, because all parties can integrate their 3D models together to ensure their work is completely coordinated long before material is fabricated or labour arrives on site. It makes the whole process less adversarial and more

Not always the right fit?
“BIM isn’t the right fit for every job,” explains Hempel. One reason, he says, is that all parts of a team need to be on the same platform, so it’s only useful for projects where all consultants and contractors are BIM-ready.
The initial output for software, training, and – possibly – upgrading hardware can be expensive, says Trudeau. And the time and costs spent providing both 2D and 3D models can be daunting to some companies, especially smaller ones. This means it’s important for the team to make the model complete and accurate at the outset, he explains, so that the drawings become a by-product of the 3D model.
The technology also has different levels of effectiveness across the industry as the electrical and mechanical BIM software were introduced more recently. “There are limitations,” says Adrianne Mitani, B.Eng. of Smith + Andersen, mechanical and electrical consulting engineers, in Ottawa. “On one project, I moved a pipe, and when the program made the same shift on every floor, it caused conflicts in the basement.”
“I think one of the bigger problems,” however, says Mitani, “is that every time we coordinate models we get warnings, which often cause ductwork and piping to shift and disconnect, sometimes even deleting elements. It is a time consuming exercise to address each change in the model.”
She believes that BIM’s functions are more advanced for architects and structural engineers. But she sees that the program keeps improving to meet her company’s needs as it’s updated each year. And she points out that it is a very helpful tool for coordinating the different disciplines during the design process.
And it’s possible to modify the software. “Invest in software development or its interoperability,” suggests Trudeau. “This will give you the power to force the tool to do something you need it to, where it might not have that capability out of the box. Most of the major tools, along with an open API, will provide some level of access to the base code.” In this way, BIM can be tailored to each company’s needs, in order to get the most out of the program.

Araina Bond is a freelance writer based in Ottawa.