Prestressed concrete cylinder pipe (PCCP) is used for water transmission pipelines of large diameters that often supply the water for an entire city. These pipes have a low failure rate compared to pi... 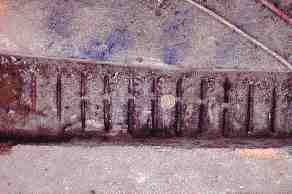 Exposed prestressed concrete cylinder pipe with wires wrapped tightly around. Seven wires beside the penny have been cut for the acoustic monitoring tests.

Prestressed concrete cylinder pipe (PCCP) is used for water transmission pipelines of large diameters that often supply the water for an entire city. These pipes have a low failure rate compared to pipes made of other materials. Because of their size (up to four metres) and critical role in the water supply, however, if they do fail it can have serious consequences.

Failures in prestressed concrete cylinder pipe typically occur because the prestressing wires, which are wrapped in a tight spiral around the pipe to keep its concrete in compression, have corroded. If enough wire loops in a single pipe section break, the pipe will rupture because the concrete no longer has the strength to resist the internal water pressure in the pipe.

Fortunately, corrosion does not cause the wire loops to break all at once. Instead, the process takes place over time which provides opportunities to prevent failure — provided the pipe owner is aware of the deterioration. Detecting wire breaks in prestressed concrete cylinder pipe can therefore act as an early warning system, giving pipe owners enough time to implement preventive measures.

New techniques have recently been developed to detect PCCP wire problems. The staff at the National Research Council of Canada’s Institute for Research in Construction in Ottawa is completing an evaluation of one such technique in cooperation with the American Concrete Pressure Pipe Association, which represents Canadian and American prestressed concrete cylinder pipe manufacturers, and with two vendors of an acoustic testing technology.

The technique, known as acoustic emission monitoring, uses hydrophones to listen for the sounds produced when a wire loop breaks. Depending on the approach, a pair or an array of hydrophones is placed in an operating pipeline. An operator records the time at which the sound of a wire break arrives at each hydrophone. He or she can then determine the location of the break based on the spacing between the hydrophones, provided at least one hydrophone is located on either side of the wire break.

The tests at IRC’s Waterline Experimental Facility examined how well the technique can distinguish between the sounds produced by a wire break and typical noises such as those produced by construction and traffic that might be encountered in or near a pipe.

For the project, two and a half sections of buried prestressed concrete cylinder pipe with a total length of 20 metres were exposed. Over the course of five days, 41 wire loops in these pipe sections were broken by using corrosion cells, quick-cut saws, bolt cutters, and a hammer and chisel (see photo). The sounds produced by the breaking wires were recorded by the technology vendors for analysis. In addition, recordings were made of various background noises, including heavy construction machinery, traffic movement near and above the pipe, weights dropping on the pipe, hammering on the pipe and the noise produced by water flow through a T-junction that had been attached to the pipe.

The tests also showed that both vendors had a high rate of wire break detection. Each vendor was able to correctly identify all but one of the wire breaks. The one wire break that was missed by each vendor took place between two previous wire breaks on the same wire loop, suggesting that the break may have been missed because the wire had already lost its pre-stress.

These results were achieved in a pipe system that was unpressurized and did not have water flowing through it. Field testing is necessary to determine the exact success rate for detecting wire breaks in an operating pipeline. However, the high rate of success in the tests conducted in Ottawa, and the technique’s ability to discriminate between the sounds of wire breaks and other noises, suggest that acoustic emission monitoring will give pipe owners a new tool for managing their prestressed concrete cylinder pipe lines. CCE

Dr. Jon Makar is a research associate with the Urban Infrastructure Rehabilitation program of National Research Council’s Institute for Research in Construction in Ottawa.