When you design with timber you have to think of a different kind of architecture, because the material itself doesn’t take loading in the same way (as steel or concrete). 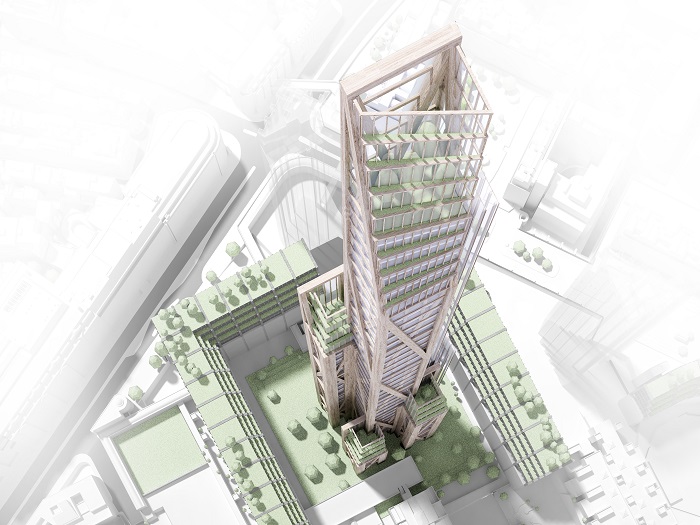 With the theme of “Form Follows Nature: Building a Net-Positive Environment”, the 2017 Green Building Festival (hosted by Sustainable Buildings Canada) is being held October 5 in Toronto at the Toronto Marriott Eaton Centre. This one-day event will feature talks on building projects completed and envisioned that are eliminating carbon and contributing to cleaner urban environments. 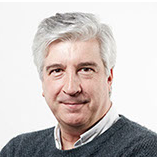 The opening keynote presentation at the day-long conference features Kevin Flanagan, partner with PLP Architecture (London, UK), who will focus on two projects: The Edge, a “smart” green building located in The Netherlands; and Oakwood Tower (pictured above) a feasibility study demonstrating the viability of building an 80-storey, 300-metre, timber tower constructed with cross-laminated timber (CLT) in downtown London.

Ahead of the Green Building Festival, Canadian Consulting Engineer spoke with Flanagan to learn more about the Oakwood Tower project and his thoughts on the future of timber towers in Canada and around the world.

How did the Oakwood Tower project cross your desk?

We were invited by Cambridge University to look into the use of cross-laminated timber for high-rise construction. This was about 1-1/2 years ago, and there was very little discussion of high-rise timber, something for residential particularly, so we were just at the crest of the wave of the media interest in this particular subject.

We did a proposal, placing the tower in central London, in a courtyard that was at one time intended to be public housing.

What did you learn about working with CLT?

This is a new material, it’s strength and fire resistance is considerably different than just wood alone. The cross laminating helps quite a bit.

A solid wood log can have a weakness, and forces will go to weakness. With CLT, if there are anomalies in the material they’re taken away from the calculation because you’re able to cross laminate the material.

It’s very light and apparently can be cut with very great precision. Because it’s light, you may not need the same types of foundations you would need otherwise because the building itself is not as heavy.

And it takes about 20% of the time it would take to build something out of concrete or steel. And the number of people on-site is about one-half or one-third. That’s important in cities like London where it’s very congested and the planning authorities restrict the amount of time it takes to build things. 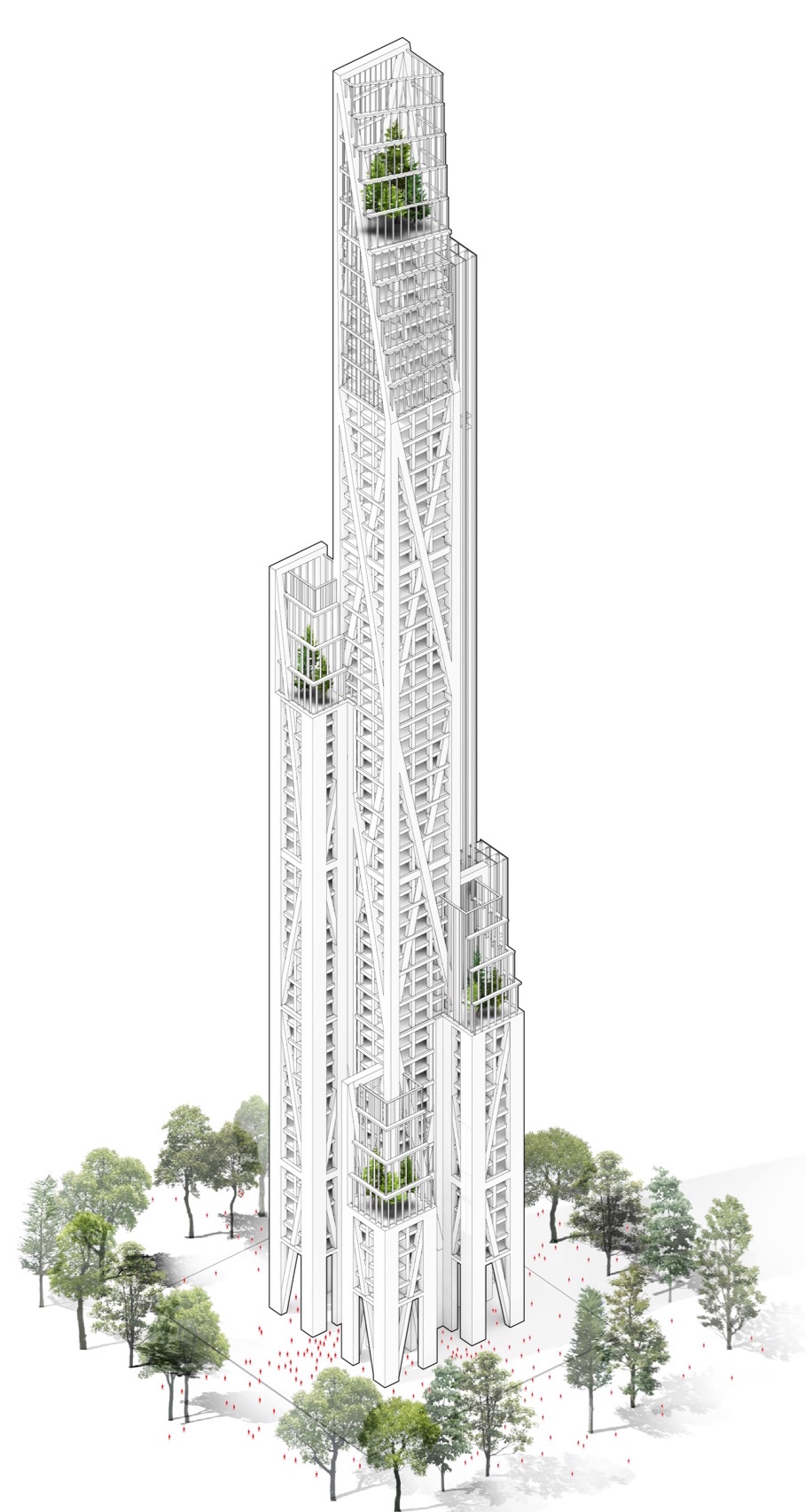 How is designing with timber different from other materials?

When you design with timber you have to think of a different kind of architecture, because the material itself doesn’t take loading in the same way (as steel or concrete).

It’s weak in tension and fairly strong in compression. So you have to deal with distributing the loads in a different way. What we’ve been doing is putting all of the loading on the outside. So you get an external frame to the building instead of an internal core.

That’s why the building looks as it does. You can see the structure itself is on the outside, on the façade.

And it doesn’t span quite as far, it’s very good for residential which tend to be smaller scale dimensions internally, about 3m or 4m centres, more modular structural systems.

So the architecture is responding to the material. And that’s what’s really interesting because this is a new material you’re starting to get a new language of design.

On the ground floor, on the very base of the tower, the timbers are 2.5m x 2.5m, they’re made out of sections of 1.25m x 1.25m, so the biggest columns are actually made of four parts that are brought together.

The four corners are critical to getting the building to stand up, and in fact the building is its own scaffolding. So you basically have four little buildings on the outside, all connected by a much larger central building.

Buildings are designed for comfort, and that’s the reason for the shape of the tower as it is. It’s more spire like and tapered at the top. That’s a response also to the characteristics of the timber itself, because of its inherent structural qualities.

What can you say about the environmental advantages of working with timber?

It sequesters CO2, and because in our case the wood would be from managed forests in Europe, like any crop once you harvest the material it grows again, so you have this virtuous cycle. 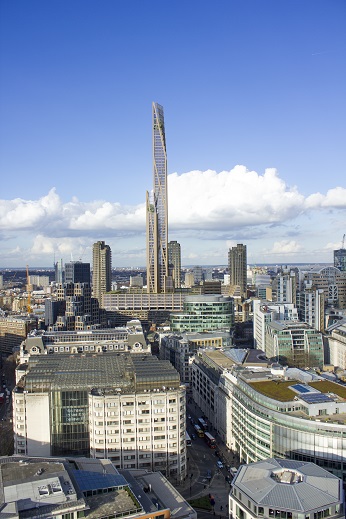 The project could be built. It would need more testing and would need an investor who would be willing to go through further testing of the scale of the member sizes that we’re proposing.

Cambridge  University is already underway with testing very large sections, and the tests seem to have gone well, but there are connections that would have to be tested and more. About a year-and-a-half or two years of more study would be required.

What’s holding back progress in building tall with timber?

There are engineers who specialize in steel or concrete, but very few have an expertise in this type of material because it’s so new.

And contractors also are more concrete and steel oriented … because that’s their bread and butter.

In Sweden they’ve found that they have to get small developers and contractors who specialize in building with this material, and only then do they actually get some momentum built up in the market as these developers who specialize build larger and large schemes.

It’s a bit like Tesla, they’ve never used gas in their cars, you need to have somebody who is going to create a whole new sector.

You would think it’s going to be similar, but it’s not because people are just more comfortable using a material they’re more familiar with.

And they cost the materials as well based on their familiarity and their assumed production levels throughout the year.

So for a variety of reasons, new products are difficult to get into the market, and difficult to have adopted quickly, especially by larger contractors.

And also by engineering schools, because they’re producing the minds and expertise for the next generation, so if they don’t incorporate timber then the industry doesn’t move forward.

Can building towers with timber catch on?

A hundred years ago in Chicago they were constructing buildings of 12 storeys out of steel, and that’s sort of where we’re at now.

Canada has great potential, because in Europe timber is a luxury material. And Canada is one country that has a GDP that’s dependent on timber, and it needs retooling (because the pulp and paper industry hasn’t moved forward much). So there is movement to use this kind of material in high-rise buildings.

The 18-storey Brock Commons Tallwood House, built at the University of British Columbia, is a tall wood hybrid building, with concrete cores for lateral resistance to wind load.

There are a number of hybrids that have come up, and mostly they’re concrete masquerading as timber, that’s my thought. We’re at the stage where we need purity of a commitment towards the technology.