The MAX Purple corridor, one of three new MAX BRT lines in the city, has transformed over 3 km of 17 Avenue SE. 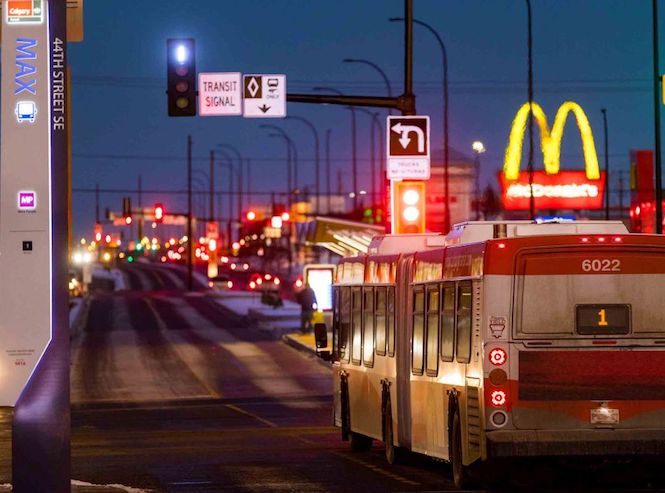 With hundreds of businesses located along the 17 Avenue corridor, a median running transitway was selected to optimize the transit operations and minimize bus/vehicle conflicts (looking eastbound at 44 Street SE). (Photo: Jaime Vedres)

The MAX Purple corridor with dedicated lanes in the middle of the roadway, the design led by Stantec, has transformed over 3 km of 17 Avenue SE, and provides Calgarians with an improvement in the speed and reliability of transit operations in the corridor, as well as a safer pedestrian experience.

“In designing the MAX Purple corridor, we considered not just the transit experience but the experience of all road users and the wider community,” says Dave Thatcher, senior principal at Stantec. “By taking a 360-degree view of the area and considering future development, we’ve provided a solution that will improve 17 Avenue SE immediately, and into the future.” 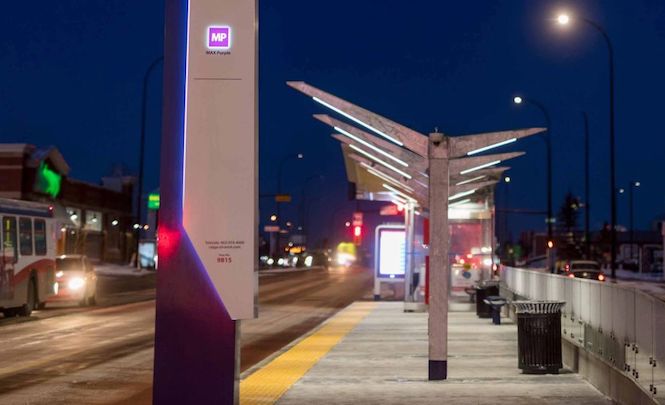 Stantec worked with GEC Architecture to design stations using a “kit of parts” approach, allowing the same components to be used on a variety of scales of stations across the City’s BRT system. The MAX Purple stations include heated shelters, real-time information, security and future allowances for off board fare payment. (Photo: Jaime Vedres)

Calgary’s 17 Avenue SE has historically had a significant number of pedestrians and transit customers, though the facilities to accommodate them were in need of enhancement. Narrow sidewalks were widened, and a buffer was added between the pedestrian realm and the roadway. In Phase I of the route, the BRT travels along a median transitway through the International Avenue business district—home to more than 400 businesses. The full length of the MAX Purple Line is home to 60,000 Calgary residents.

Phase 2 of MAX Purple is a dedicated facility that runs parallel to 17 Avenue and includes 2 km of pathway that pass over the WID Canal, Deerfoot Trail, and the Bow River, providing several direct connections to the City’s extensive pathway system. Initial plans have also been developed to offer dedicated on-street bike accommodation on the parallel corridors.

The new transitway bridge over Deerfoot Trail has been designed to allow for potential future conversion to LRT (looking west towards downtown Calgary). (Photo: Jaime Vedres)

This project will serve as an example for other jurisdictions in Canada on how to cost-effectively enhance transit while improving the public realm. The project was led by the City of Calgary with funding from the Alberta and Federal Governments. 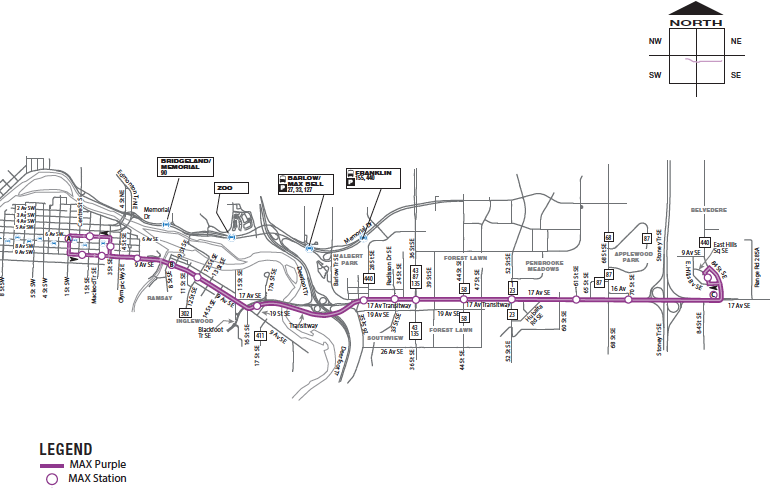