Situation at the OIQ: Interview with the president 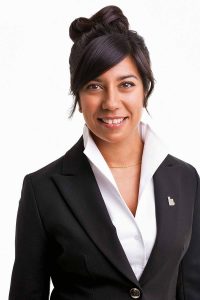 On July 6 the Office des professions du Québec, an arm of the provincial government that oversees professional bodies, placed the Ordre des ingénieurs du Québec (OIQ) under its administration. The order effectively removes the engineering licensing body’s right to be self-governing for an unspecified period. Kathy Baig, ing., FIC, MBA, had been elected President of the Order just a few weeks before. Ms. Baig replies to three questions posed by CCE.

Q. What is the current situation
of the OIQ?
The Ordre des ingénieurs du Québec is continuing efforts to transform the organization that it began over two years ago. This major project coincides with the OIQ’s desire to modernize its public protection activities and step up its prevention efforts in the area of ethics.
In fact, although the vast majority of Quebec engineers rigorously follow best practices, the media revealed that certain engineers had been involved in public contract sharing schemes. We believe that compliance with very high standards of ethics and professional conduct is a basic condition for practising as an engineer in Quebec.
Our efforts toward that end continue under the supervision of administrators designated by Quebec’s Minister of Justice.

Q. What have been some of the troubles faced by the OIQ that have led up to the current situation?
While the Minister acknowledges that the OIQ has taken great pains to deal with this situation in the last two years, she expressed a desire for the OIQ to speed up its efforts to reorganize its public protection activities.
More specifically, she would like the OIQ to reduce the period of time it takes to process complaints filed with the disciplinary committee that concern the small number of engineers who have not complied with the Code of Ethics. She also expressed a desire for the OIQ to modernize its professional inspection activities, and this project is already under way.
These are shared objectives that we are working on right now.

Q. How are you hoping the situation will be resolved eventually?
The Ordre des ingénieurs du Québec is already on the right path. Our organization began to review its professional inspection activities in the interest of making them even more relevant; the disciplinary office is working twice as hard to complete its inquiries, and we have a solid financial plan.
In the coming months, we need to improve communication with members and the public through concrete actions that will allow us to secure their trust. By becoming more efficient in executing our activities and better highlighting engineers’ role in society, we will definitely achieve this.