A 1990s-era membrane filtration plant in a northern Ontario town was creating too much backwash until upgrades enabled the process wastewater to be recycled.

Sioux Lookout Water Treatment plant in the southwest of town.

About 400 kilometres northwest of Lake Superior, high on the Canadian Shield, lies the municipality of Sioux Lookout, Ontario. The town is home to about 5,000 people, but it is also a tourist centre and acts as a hub for 29 First Nations Communities who live in the remote northern region.
At the heart of the town is Pelican Lake, which is the source of its drinking water. Even though the environment is relatively pristine, the lake water has heavy loads of suspended solids, as well as other contaminants.
A membrane filtration plant was built in the 1990s in the southwest of town to treat the raw water drawn from the lake. However, the plant was creating problems because the older membrane treatment process was creating such a large volume of backwash it was overloading the sewer system. Of the water entering the plant, about 18% was being rejected into the sewage system, which is more than double the rate of a typical plant of this type.
JR Cousin Consultants (JRCC), was asked to find a solution. Our company works extensively with remote and First Nations communities in northern Saskatchewan, Manitoba and Ontario.
We considered various options. They included adding plate settlers, DAF (dissolved air flotation) technology, or building a large settling chamber at the plant. However, all these would have required a new outlet pipe to carry the treated water about 150 metres to the lake. The construction would have been expensive because of the rocky terrain.
Whichever approach was chosen, the Ontario Ministry of Environment required that the water released back into the lake had to be treated for total suspended solids (TSS). The processed wastewater had several undesirable characteristics and contaminants: colour, turbidity, aluminum, iron, high amounts of suspended solids, dissolved organic carbon (DOC) and total organic carbon (TOC). There were also high Cryptosporidium levels. 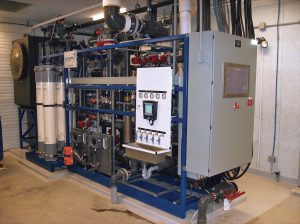 Above: ultra-filtration membranes were added to the existing membrane system. Previously the plant had been overburdening the town’s sewage system with rejected water.

Reclaiming process water
as potable water
The solution found was to add an ultrafiltration membrane treatment system and ultraviolet disinfection onto the existing processes. These additional systems remove the contaminants and make the process wastewater potable quality. It is then recirculated within the plant rather than rejected.
The raw water first passes through the original filtration unit. The wastewater from the first unit is then passed through new ultrafiltration membrane units that were custom-designed by JRCC and a Saskatoon fabricator. The treated water from the second unit is blended with the treated water from the first unit, and disinfected by the UV system. In short, the majority of the process wastewater is treated to the Guidelines for Canadian Drinking Water Quality levels, and returned to the system as potable water.
The small amount of process wastewater that is not reclaimed is discharged to the sewer system and ultimately the sewage treatment plant, so a new outfall pipe was not required.
Reclaiming process wastewater as potable water is not common practice. A six week on-site pilot was first conducted, which allowed the team to optimize the system’s parameters. The goal of the pilot was 70% recovery, but through the optimization process, we were able to have the system recover 75% of the wastewater while maintaining the adequate removal of suspended solids and achieving effective membrane cleaning.

Drastic reduction in release
There are two main benefits from reclaiming the process water. It reduces the amount of raw water required from Pelican Lake, and it drastically reduces the amount of water that was being released to the town’s sewer system. Whereas the plant had been producing process wastewater at an average of 557 m3/day, or 18.9% of the raw water, the overall process wastewater is now reduced to 139 m3/day, or only 4.7% of the raw water. The upgrades increased the plant’s treated water capacity by 8.52 L/s. The facility also uses less electricity to pump water in from the lake and out to the sewage system.
Because the project was achieved under budget, there were funds left to allow for the ultraviolet disinfection system to be designed to treat the plant’s entire water supply.
To avoid a building expansion, the system was designed to fit within the existing building’s footprint. To make space for the new UF equipment, a generator set was removed from the interior and replaced with a new 300 kW diesel generator located outside in an all-weather enclosure. An unused sodium hypochlorite bulk tank was also removed.