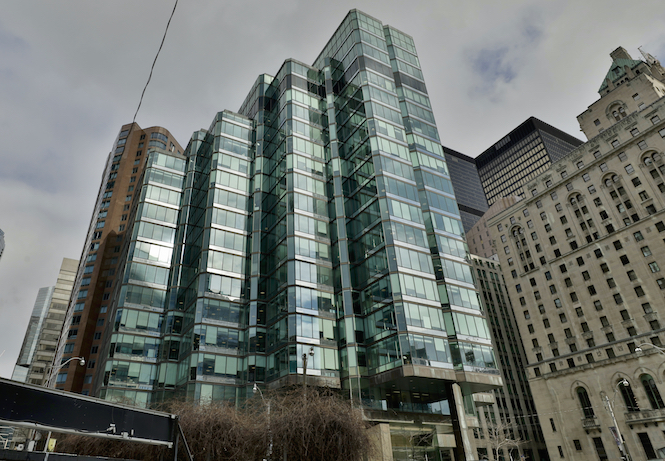 One University Ave. in Toronto, owned and managed by Oxford Properties. Observe the glass on the 17th floor of the 20-storey tower, and note the number of windows with the blinds drawn.

Can access to daylight and clear sight lines from your workspace in an office tower improve your health and boost company morale? According to the results of a new study, commissioned by View, manufacturers of electrochromic windows, the answer is yes.

The California-based company that makes smart windows has released the results of a study conducted at an Oxford Properties’ office tower located at 1 University Avenue in downtown Toronto.

A group of employees at Canada Lands Company, a federal Crown corporation, were surveyed regarding their work-related health and performance before and after the team moved offices within the same building.

The research findings were based on multiple in-person interviews and environmental observations of 17 subjects in the 36-person Canada Lands office. The results were reviewed and analyzed by professors Vivian Loftness of Carnegie Mellon and Joon-Ho Choi from the University of Southern California.

Canada Lands has been a tenant in the building for over a decade, and the only significant changes over the course of the study, which spanned seven months (March through August, 2018) was the group moved from the 12th floor to the 17th floor, and in the new space, instead of regular coated low-e glass with blinds, the windows were replaced with dynamic glass and no blinds.

With integrated intelligence, the electrochromic glass is set to tint when the sun’s glare is strongest and remain clear at other times.

“What the researchers found is, prior to the move, if the glare was a problem early in the morning on the east side of the building, the occupants would pull the shades down or tilt the horizontal blinds … and then they wouldn’t open them in the afternoon or the evening. So for most days of the year the blinds remain 50% to 100% closed,” notes Brandon Tinianov, vice president of industry strategy at View and chair of the U.S. Green Building Council’s advisory council.

“When you switch to dynamic glass, you manage the glare away in the mornings, and you open up that viewscape and give everyone back that view.”

“There’s a lot of data that shows that manual blinds are set in position and don’t move about 94% of the time—manual blinds become fixed blinds in most situations,” says Tinianov. 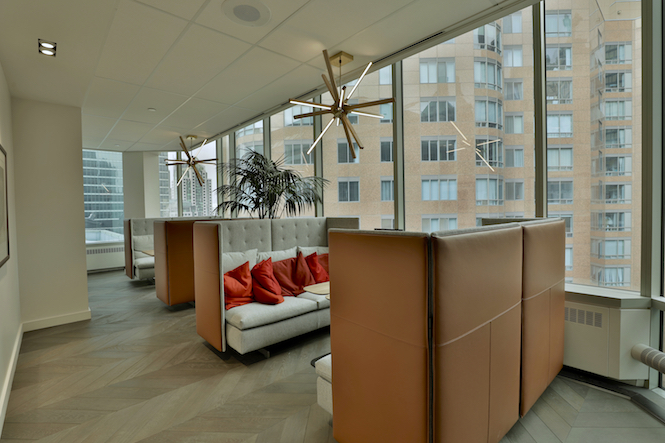 Canada Lands office space with dynamic glass and no blinds.

Exposing clear glass welcomes ambient light into a workspace, providing a richer daylight environment, and according to the study, the group at Canada Lands reported significant improvements in their mood and employee engagement, while also reporting reductions in eyestrain, headaches, and drowsiness.

“Employee experience and wellness is a top priority for us and having the optimal amount of natural light in our new offices is a key enabler,” said John McBain, president and CEO for Canada Lands Company in a release announcing the study results. “As an additional benefit, it’s reduced HVAC demand by 28% and better maintained the set temperatures.”

Reductions in glare and heat gain lowered interior temperatures by up to 12 degrees F, saving between 21% and 32% of HVAC usage over similar floors in the building during the evaluation period.

The dynamic glass can be controlled by its own intelligent control network and optimized for employee experience and comfort, or it can be tied into a building management system to allow any level of control that a building owner wants over the glass.

“Access to natural light is one of the key drivers of tenant satisfaction, and this study provides encouraging data to support the customer benefits associated with the investment in dynamic glass,” said Eric Plesman, Head of Canada, Oxford Properties, the owner and manager of 1 University.

For Oxford Properties, the research provided data on whether the dynamic glass saves energy for the building, and through the Canada Lands employee feedback they could determine whether their tenants received benefits.

“One of the things we found is people started to recommend the building,” says Tinianov.

“They went from a zero percent connection to nature to a 57% connection to nature. And their likelihood to promote the building went up 3x, and their pride in their company went up 5x. So those are the things that are much harder to achieve and design into your building than energy savings.”

Another building in the Toronto area with View’s Dynamic Glass is the recently renovated Humber River Hospital, the first fully digital hospital in North America.

“Everybody is required to have enough light to perform their tasks, but what we’re finding is that access to views, even more than daylight, changes people’s lives,” says Tinianov.

“There’s been ample research on access to views shortening hospital stays, and reducing pain medication by up to 50%,” he adds.

In the hospital application, the glass is tied into the building management system, and View’s intelligent controls automatically tint the glass, but patients also have bedside controls allowing them to override the windows to their own comfort settings or personal needs at any time.

For the Canada Lands group, the move to the 17th floor of the building opened up access to more daylight and views, but the group also lost some square footage as the building tapers as it goes up. According to Tinianov, some private offices became open plan, and the average workstation size dropped by 26%. “You’d expect them to revolt, you wouldn’t expect overwhelmingly positive results, and you wouldn’t expect them to be five times more likely to say they have pride in their company and three times more likely to recommend that building.”

But in the end the company experienced better space utilization, improved company morale and the building is saving energy.