“We were totally amazed by this project. The engineers were able to put an 11-storey tower on a “tabletop” above two heritage buildings and develop special frame systems to take the loads. The huge joints a metre thick are unique and very difficult to cast — completely innovative.” – Jury 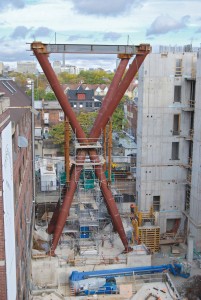 The Queen Richmond Centre West project grew out of Allied Properties REITs’ goal to create a landmark mixed-use office structure at Peter and Richmond Streets in Toronto’s downtown Entertainment District.
The project is a model of urban intensification, featuring the adaptive re-use of two historic buildings, together with a new 11-storey office tower above.
In 2010, Allied Properties REIT commissioned Sweeny &Co Architects for the project. They presented structural engineers Stephenson Engineering with the challenge of suspending the office building above the two existing structures. This configuration would form a large L-shaped, glass-enclosed atrium that would have direct street access. In order to provide unobstructed ceilings in the office buildings, the architect selected an exposed reinforced concrete structural system for the 11-storey tower.
Stephenson Engineering’s solution was to develop a “tabletop” platform seven stories in the air from which the office building could be constructed. The tabletop’s supporting structure was a significant challenge considering the enormous loads involved. The structure also needed to have lateral stiffness given the eccentric location of the elevator core and the more than 75-ft. 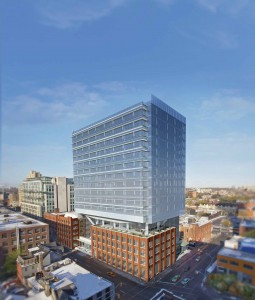 unbraced height from the top of the foundation level to the underside of the tabletop. The architects also wanted a support structure that did not clutter the atrium.

Mega Delta-Frame System
Stephenson Engineering led a design charrette with the architects which resulted in the design of the “Mega Delta-Frame” system. Inspired by children’s jacks, the structural support system consists of three frames, each in an hourglass configuration formed from two stacked rectangular-based space frame pyramids. The top pyramid is inverted such that the apex of both pyramids meet at one central node 40 ft. in the air. The system aligns each of the corners of the frames directly beneath tower columns above, providing a direct load path for gravity loading.
Each frame consists of 1-metre diameter steel legs with a steel thickness of 2-inches, pressure-filled concrete, and a 17-ton cast steel node engineered by Cast Connex. The result is a soaring open air atrium that sets the development apart from any other. Each Mega Delta-Frame is capable of supporting forces of 80,000 kN, which is approximately equivalent to the weight of 400 transport trucks.
The mega delta-frames also form a major part of the lateral system; the only other effectual lateral support through the atrium space is provided by reinforced concrete stairs and an elevator core. In addition one of the existing buildings was fitted with new foundations and internal structure, including columns protruding through what was once the building’s roof to support a portion of the building above.

Heritage conservation and inspiring architecture
The development brought much needed attention and activation to an often-avoided intersection of Toronto’s west core.
In addition, the salvaging of one historic century-old brick building, which was originally constructed as a biscuit factory by Weston Bakery in 1915, helps retain a part of the neighbourhood’s heritage.
The social significance of inspiring architecture is well known. While the building’s soaring atrium and retail spaces extend the public realm indoors, passers-by often stop to marvel at the extraordinary feat of structural engineering.
Aiming for LEED Gold certification, the building design includes sustainable features such as rainwater collection, solar shading and light shelves on the facade, and operable windows.