Stantec is doing architecture, structural, mechanical and electrical engineering for the first phase of the new Centre for Addiction and Mental Health at 1001 Queen Street West in Toronto's west downt... 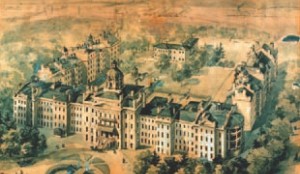 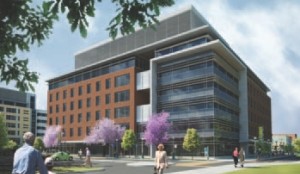 Stantec is doing architecture, structural, mechanical and electrical engineering for the first phase of the new Centre for Addiction and Mental Health at 1001 Queen Street West in Toronto’s west downtown. The entire site, on which a mental health institution has existed since 1850, is undergoing redevelopment. In this phase, three new buildings totalling 42,000 m2 are being constructed at a cost of $293 million. The 27-acre site will also have new sidewalks, shops and open spaces to integrate the complex into the neighbourhood.

The three buildings (project leaders at Stantec are Colm Murphy and Barb Miszkiel) are being designed for LEED-Gold certification.

When the original Queen Street asylum was built in 1850 it was one of the most advanced buildings of its time, with central heating, mechanical ventilation and indoor plumbing. These were all “designed to treat patients in a humane environment.” The 19th century structures were demolished in 1976 and replaced with new buildings. The centre has been variously known as the Provincial Lunatic Asylum, 999 Queen Street (it was actually No. 1001), and the Queen Street Mental Health Centre.

Stantec is part of the Carillion Health Solutions Group which signed a contract in December to design, build, finance and maintain this phase of the project. Demolition has begun on the site.