A busy train station catches up with present and future needs. 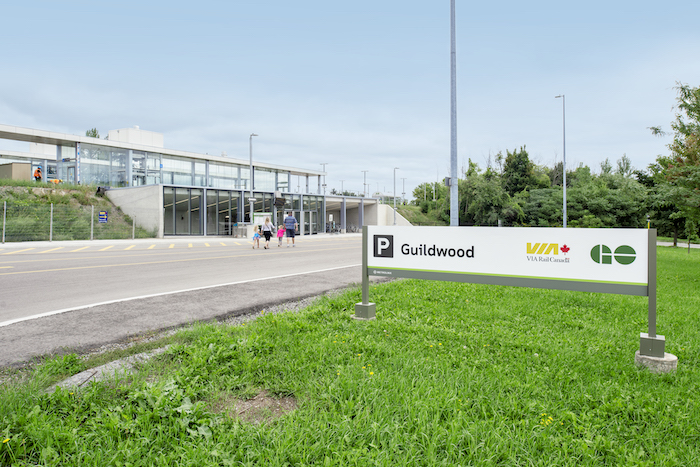 Guildwood GO Station, established in 1977, served a few thousand rail passengers annually before the growth of its surrounding neighbourhoods and of local GO commuter travel. Amid the area’s development and population growth, service demand expanded until the station was serving nearly 250,000 passengers a year, which led to a need for redevelopment. 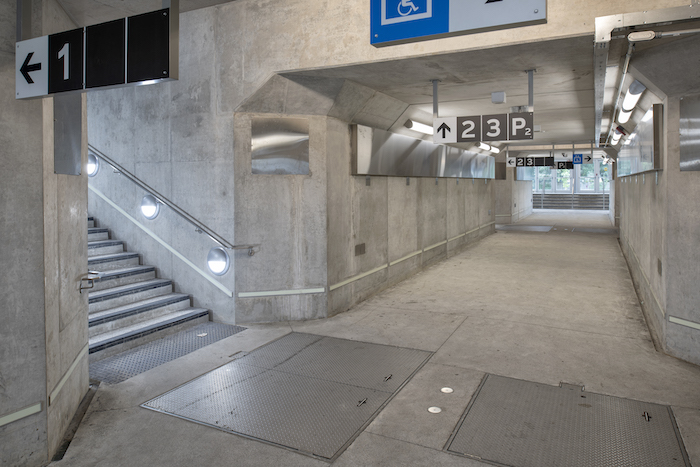 The existing tunnels at the station were dark, narrow, leaky and not fully compliant with the Accessibility for Ontarians with Disabilities Act (AODA). The project involved establishing two new, accessible tunnels to enhance safety and visibility.

As the Lakeshore East corridor’s rail lines through the station remained live throughout the redevelopment, constructing the tunnels involved the installation of 330 temporary caissons (chambers), requiring nearly 300 m of temporary shoring, during evenings and weekends to avoid service interruptions. Once the shoring was complete, concrete tunnels were installed during two 53-hour periods over two weekends, when train traffic was shut down on two of the three rail lines.

Thus, precast tunnels were preassembled outside the rail corridor and pushed into place using the jack and slide method—a first for Metrolinx and successfully implemented for other projects since then. 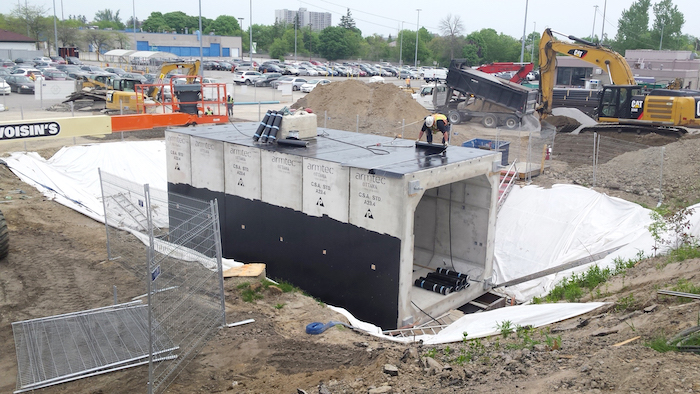 Precast tunnel segments were assembled outside the rail corridor prior to installation.

This methodology provided a number of advantages. First, it allowed the tunnel segments to be assembled and post-tensioned together prior to the 53-hour weekend shutdown, thus reducing the activities that needed to happen within that window. Second, waterproofing was also pre-installed, again reducing activities during the weekend shutdown. Lastly, it avoided the need for a large crane on an already congested site to hoist the precast segments into place.

Once the construction of the precast tunnel sections was completed after the two weekends, the tracks were fully reinstated to all commuter, intercity passenger and freight traffic, allowing regular operations to proceed. 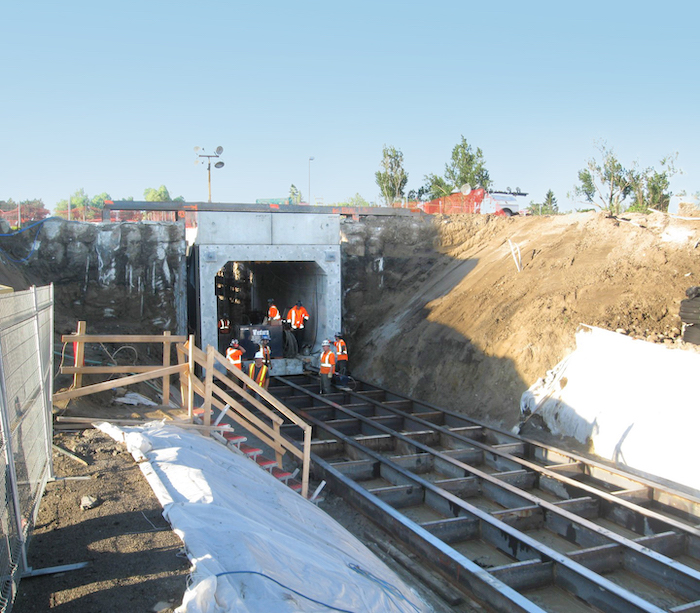 The project marked Metrolinx’s first use of the jack and slide method for tunnel installation.

The tunnels also provide a clear opening to the roof of the platform canopy at stairways and elevators, allowing significantly more natural light in than at any other Metrolinx station. This provides the feeling of very short tunnels, rather than one long ‘solid box’ tunnel with access to platforms branching off. Additionally, the redeveloped Guildwood GO Station features Metrolinx’s first green roofs over the tunnel entrance structures, the utility building and the station building lower roof. 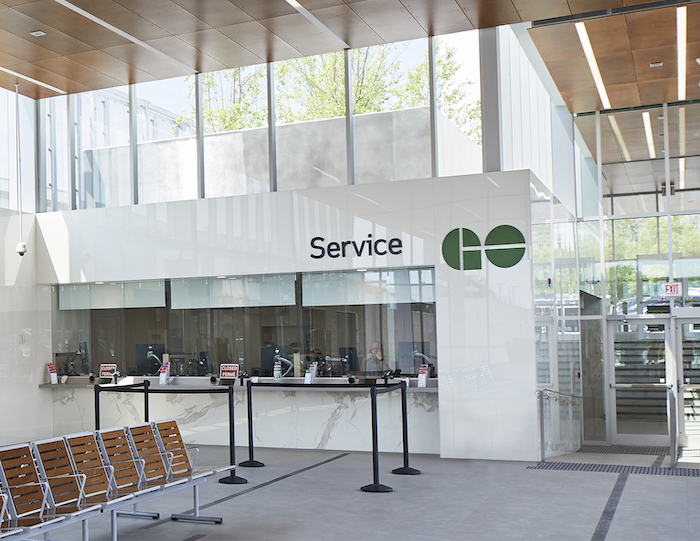 The greatest complexities of the project included designing for train loads and ensuring the station could remain fully operational throughout the construction period. The existing train right of way is elevated over both the north and south parking lot. To design and provision for a future fourth rail, while minimizing parking losses, large retaining structures were required.

Elaborate staging was essential in ensuring the all of the station’s platforms could remain operational throughout construction, as did the old station building until the new, much larger one was commissioned. In the end, only some 3% of parking spaces were lost.

Guildwood GO Station is currently going through the certification process for LEED Silver certification, based in part on the following aspects:

Previously, any rain runoff from the station was funnelled into the local storm system, with no quality or quantity control. Two major elements were added to assist with these issues.

On the platform, nearly full-length canopies capture rainwater and convey it to a new storm detention system on the north and south sides, preventing it from landing in the right of way and washing down to the parking lots, where it could pick up contaminants. Oil grit separators (OGSs) also partially pretreat the water as it flows off-site at a sustainable rate. The setup provides a large area for the water to infiltrate the ground, recharging the local aquifer.

Another first for Metrolinx is the use of stainless steel boilers for snow melt systems on the platforms. Previously, cast steel boilers were used, which are far more energy-intensive. The new boilers can also fluctuate the number of burners needed, help reduce energy consumption further.

Removal of lead paint and toxins 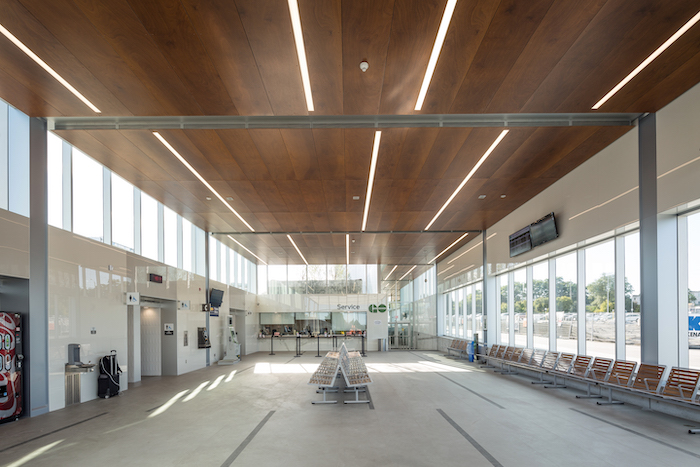 The previous station and grounds were run down. With the redevelopment has come reinvigorated interest in the area. Two new condominium developments have begun the process of site plan approval and design, one of which is on the northeast corner of the property, while the other is located just across Kingston Road. The updated station will continue to help spur development in the neighbourhood.

Chris Woit is a director with WSP in Canada. This article originally appeared in the January/February 2021 issue of Canadian Consulting Engineer.