Pan Am Prize: Toronto Pan Am Sports Centre, U of T Scarborough

The centre provided a stunning backdrop for events at the summer Games. The structural engineering was complex with removable columns to provide unobstructed views in the vast aquatic centre. 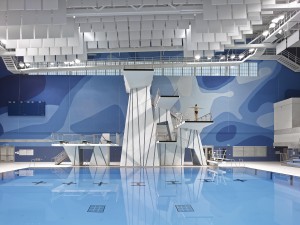 Dive Tower at the Toronto Pan Am Sports Centre at the University of Toronto. Photo: Shai Gil.

During the first thrilling days of the 2015 Pan Am Games in the middle of July, millions watched the aquatic events broadcast from the sparkling new Toronto PanAm Sports Centre at the University of Toronto Scarborough campus.
But for structural engineer Mark Campbell, P.Eng. of WSP, the images were especially riveting. “Watching the Games on TV, I found my mind flipped to the drawings,” he says. “It was fun comparing how the building looks in reality to what we designed two years ago.”
The Toronto Pan Am Sports Centre (previously known as the CIBC PanAm Aquatics Centre and Field House) has been described as “awesome” and has already won awards. These include “Best Project built in Ontario for 2015,” presented by the Ontario General Contractors Association this spring. It has also managed to be certified LEED Gold, surpassing the target Silver certification.
PCL Constructors Canada was the design-builder, along with NORR as the project architect. Subconsultants to NORR were WSP (then Halsall) as structural design engineers, and Smith + Andersen as the mechanical, electrical and communications design engineers.
A relatively low-profile structure, the complex sits on the eastern fringes of Toronto, south of Highway 401 off Morningside. It spreads its considerable 312,000 sq.ft. (29,000 sq.m) below low sloping volumes that are architecturally inspired by the glacial geology of southern Ontario. Its expansive roofs support 2.2 acres of photovoltaic panels that generate electricity, and 1.3 acres of green roof.
The main north-south circulation axis is flanked on the east by the aquatics centre, which has two 50-metre,10-lane international standard pools and a 5-metre deep diving tank. On the west side of the axis is the field house, with a four-court gymnasium, running track and fitness centre. During the Games this section hosted events such as the pentathlon, fencing, speed skating and sitting volley ball. There are studio spaces, a climbing wall, and concessions. Finally, to the northwest is the permanent home of the Canadian Sport Institute of Ontario. This is a high-performance training, therapy and research centre for elite athletes.
In a strategy that architect David Clusiau of NORR believes might have helped their design-build team win the contract for the project with Infrastructure Ontario (two other teams were in the running), the designers located the lower levels of the building below ground. The ground had to be excavated anyway as the site was a former brownfield with contaminated material. All the actual sports activities take place at this lower level, which ensures that light entering these areas is indirect and doesn’t dazzle the players. Meanwhile, people passing by outside can look down into the space and watch the activity.
The largest of a handful of new facilities constructed for the Pan Am Games, the $160-million complex will have a rich legacy. It is jointly owned by the university and the city of Toronto and now serves as an open, public amenity used by both students and the local community. 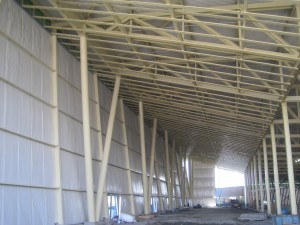 Removable columns (at right) and permanent V columns (at left) in the temporary seating enclosure of the Aquatics Centre, Toronto Pan Am Sports Centre, University of Toronto. Photo: WSP.

Removable columns
The Legacy v. Pan Am Games aspect of the building inspired an unusual structural engineering approach. To make room for approximately 1,000 extra spectator seats during the Games, a temporary enclosure was added in the Aquatic Centre along its east side. The roof for the centre is a 4-metre deep truss that spans 76 metres over the pool, including over this temporary enclosure.
At the inside edge of the temporary enclosure is a row of removable columns. Under normal conditions, i.e. pre- and post-Games, these 16-metre high columns are there to support snow loads on the roof. But for the summer Games when there is no snow load, the columns could be removed so that the spectators’ sightlines were not blocked. Another row of large 500-diameter tubular steel V-columns, 15 metres beyond the removable columns, stayed in place to support the roof at all times.
Now the Games are over, the removable columns will be re-installed and the temporary seating enclosure will be removed. The removable columns will become part of the permanent outer wall and the roof beyond that point will be exposed. A 3-metre section will cantilever beyond the V-shaped permanent outer columns as a canopy.
Campbell explains that the removable columns meant they had to calculate the exact deflection of the roof under different conditions. It also meant carefully designing the connections between the column and truss to allow for the correct deflection gap.

Dive tower has to be made stiff
Another structural engineering highlight is the dive tower, a dramatic and beautiful structure that rises 10 metres with side platforms at different levels. Although the design was meant to “look” like concrete, a poured concrete structure would have put too much weight on the basement and its labyrinth of service tunnels.
Instead, Campbell explains, they used structural steel with a precast concrete panel exterior. However, since there are strict requirements limiting movement in the tower, they needed an elaborate system of cross-bracing: “We had to put cross bracing pretty much wherever we could, so the tower is extremely stiff and has essentially zero lateral movement,” he explains.
The precast concrete diving platforms were so heavy and large they were installed by crane through a large opening left in the roof. All of this required careful scheduling with PCL for constructability.
The pool structures themselves are a prefabricated panelized system with moveable bulkheads that sit inside a concrete shell. Since the pools are at a lower elevation, their enclosures have a 13-m high, 500-mm thick concrete buttress wall system to resist soil pressure.
All the structural steel within the pool environment had to have a three coat epoxy system in order to resist corrosion, Campbell explains. The drawings had to show the boundaries where this coating was necessary, which meant working with the architects and mechanical-electrical engineers to clearly understand the air flow within the large open spaces of the building.

Geothermal field, heat recovery
The building is designed with many energy saving systems.
“At the core of the mechanical system is the geothermal field,” says Chris Liu, P.Eng., of Smith + Andersen. A ground-source heat pump and field of 100 boreholes below a parking lot to the north of the complex provides 40% of the total cooling and 30% of the heating loads, distributing the energy to variable volume air handling units. Magnetic bearing chillers (in summer) and high-efficiency condensing boilers (in winter) provide the remainder of the cooling or heating energy. The building automation system (BAS) enables different spaces in the building to be conditioned individually according to their needs.
The pool areas with their high levels of moisture and humidity presented a special challenge for saving energy, explains Liu. One solution was to provide large, high volume low velocity fans over the pool that help circulate the air and supplement the air volume supply.
They also used a variety of heat recovery systems. In the Field House enthalpy wheels recover energy from exhaust air. In the Aquatic Centre, heat rejected from the pool dehumidification units is re-used for heating the pool water. Liu explains that the recovered heat is “low grade” i.e. at fairly low temperatures, but it serves for this purpose.
The electrical systems have a lot of redundancy built in, James Back, P.Eng. of Smith + Andersen, explains. There are two dedicated high-voltage transformers, as well as a 2-MW temporary diesel generator. The redundancy was especially critical during the Games: “Even in a utility blackout condition the building could continue functioning during the Games on the 2-MW temporary diesel generator,” says Back.

Special lighting for broadcasting
“In the output specification that we had to follow they asked for very high light levels in the pool areas for high-definition broadcasting purposes,” says Back. “They asked for 2500 lux of lighting. To put that in perspective, the Ontario Building Code minimum is 200 lux for a public pool.”
“In addition the specifications were very stringent on lighting uniformity,” says Back. “You can’t have light and dark spots as you are following the athlete down the length of the pool.”
Another challenging aspect was having to avoid “skip glare.” The fixtures each had to be strategically located so that their light didn’t skip off the surface of the water and “blind” the cameras.

Communication systems in a “selfie” world
Edward Poon, P.Eng., with Smith + Andersen, who designed the IT, communications and security systems, explains that they had to provide pathways for all the special temporary communications infrastructure installed for the PanAm Games (not just for broadcasting, but also for power, timing and scorekeeping, etc.). In the aquatic centre, much of this infrastructure is in the service tunnels below the pools.
“This stuff doesn’t look sexy for an architect,” says Poon, “so we had to hide a lot of the cable management systems out of public view, but at the same time make them easily accessible for the media, the broadcasters and the Toronto 2015 organizers to come in and install their systems.”
The high-level security systems for the Games were also installed by the Games organizers themselves, separate from the legacy building systems. The legacy systems are on a converged network, Poon explains, so the surveillance cameras and card readers run on the same permanent fibre-optic backbone as the building automation, lighting and other systems.
Naturally, when the spectators arrived in July and took their seats, they immediately took out their smart phones and started texting and tweeting images around the world. The design team had to ensure that this sudden massive demand wouldn’t cripple the wireless communication systems, as had happened at the 2012 London Olympics.
Because the pool is a “giant void space essentially,” Poon says, they had to mount the wireless access points on the catwalk  — almost directly over the pool where Canadians ended up storming to victory.