The striking architecture of a 76-storey condominium tower at the corner of Yonge and Bloor makes its mark in an upscale area of midtown Toronto. The structural, mechanical and electrical engineers describe their contributions to the design. 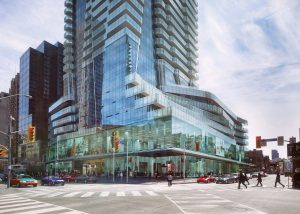 Artist’s rendering of the podium of One Bloor tower in Toronto. Image: Matt Hallett/Hariri Pontarini Architects.

Currently nearing completion, “One Bloor” sits on one of the prime sites in mid-town Toronto, at the southeast corner of Yonge and Bloor Streets. The 76-storey tower holds 700 units on a one-acre site. It is close to the sophisticated designer shops along Bloor Street West and in Yorkville, and also at the intersection of the city’s two main subway lines.
Designed by Hariri Pontarini Architects for Great Gulf, the tower rises above a striking six-storey glass podium which fronts onto the busy sidewalk with retail stores and a mid-block public walkway. The building’s architecture is characterized by undulating forms. On the Bloor Street side the glass walls of the podium curve around, and a vertical strip patterns the tower’s façade, culminating in a sloped roof. The architects wanted the building to contrast with the many modernist, rectangular buildings in the area.
On the sixth and seventh floors, i.e. at the roof of the podium, there are green spaces, spa facilities, and two pools. — cce

The original owners of the site of One Bloor Street East lost ownership in the upheaval of the 2008 financial crisis. The current owner, Great Gulf, proceeded with design and construction in 2009. Our firm had been involved with the design of the pre-2008 structure and was selected to provide structural design for the building that is being completed today.
The prestigious location resulted in high demand for units, which led to the need for structural changes to enable more efficient and desirable unit layouts. The original height of the building of 65 stories was increased twice: first to 70 storeys and finally to 76 storeys.
There are in principal three important aspect of design in these “Super Height” buildings:
• Performance of the structure for the comfort of inhabitants;
• Load transfer from the upper residential occupancy to the lower floors used for retail;
• Foundation design to provide controlled settlement of the building; 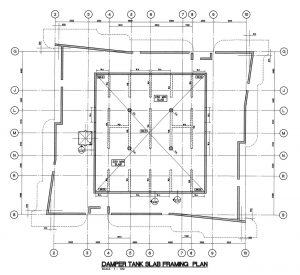 Performance of structure
for the comfort of inhabitants
The total (final) height of the structure at the highest roof of 257.3 m and minimum width of the tower in plan of 27.5 m yield a height-to-width ratio of 9.36. The wind tunnel testing carried by Gradient Wind Engineering resulted in the top inhabited floor (76th) to be 24 Milli-g’s, well over the accepted maximum of 18 Milli-g’s. A dynamic damper in the form of a sloshing water tank was designed by the wind engineers to reduce the acceleration to 18 Milli-g’s. The size of this damper located in the 78th floor is 18 m x 19.5 m in plan and 4 m in depth (see drawing).
Load transfer from residential occupancy
to retail
The typical plan of the tower above the transfer at the 8th floor consists of a combination of a linked core, corridor tube and shear wall at the demising lines between apartments. The thickness of the shear walls was varied from 400 mm (to the 12th floor), to 350 mm in the remaining floors. The thickness of the core walls was 350 mm for the entire height of structure. The transfer of the shear walls structure to retail (9 x 9 m grid) was accomplished at the 8th floor by 2300-mm deep transfer beams and an increased size and rigidity of the core.

Foundation design providing controlled settlement
of the building
The load bearing capacity of soil at SLS as specified by the geotechnical consultants, McClymont & Rak Engineers, was 1000 KPa at the final level of the P6 basement.
The foundation mat within the footprint of the tower specified at 2200 mm thickness was found to create excessive dishing at the centre, which would have a negative impact, potentially causing deformation of the upper floors of the tower.
To reduce this centre settlement, a total of 21 caissons of 1300 mm diameter of total length 19 to 24 m were socketed to shale rock for a minimum of 5 m.

When initially looking at the building design, there were several issues that needed to be taken into account prior to laying out the mechanical and electrical systems for the building. With the height of this project, the systems needed to account for: occupancy of the various uses; overall system efficiency; stack effect and thermal expansion of the various piping systems.

Heating and cooling: multiple stand-alone systems
Rather than provide a traditional single plant located at the top of the building with pressure break heat exchanges to deal with the excessive pressures of a super tall building, the building was designed with multiple complete stand-alone systems for various sections. On the third floor there is a mechanical room that contains the equipment for levels 3 to 40 of the condominium; there is a second complete system in the mechanical penthouse serving the condominium units on levels 41 to 75. Then there is a third system (heat pump) that serves the retail components of the project (in the basement, ground and second floors). This third plant was located on the second and third floors.
The condominium suites are heated and cooled using a four-pipe fan coil system. Each of the four pipe fan coil plants consist of condensing heating boilers, centrifugal chillers, and dedicated heat recovery chillers. To provide maximum efficiency the boilers are all high-efficiency condensing (operating at 94% rated efficiency). With the use of multiple condensing boilers, the water distribution temperature in the heating system was designed to be lower than a typical fan coil system, allowing the boilers to operate in the condensing range (for optimum boiler efficiency). The suite fan coils were selected to operate with the appropriate heating coils to ensure the proper delta T is maintained.
Because the heating water temperatures are operating at condensing temperatures 49° C (the temperature varies based on an outdoor air reset schedule), a dedicated heat recovery chiller (DHRC) could be used for the shoulder seasons. When there is simultaneous demand for both heating and cooling in the building, the DHRC will operate. The DHRC rejects the heat from the cooling system loop back into the heating system rather than through the cooling tower into the atmosphere, thus maximizing the overall system efficiency. This strategy also allows the larger centrifugal chillers to shut down under small part loads to maximize efficiency, and allows the primary cooling towers to be shut down during the winter. In addition, the hydronic systems use variable speed pumping for all pumps throughout the building reducing motor horsepower during partial load situations.

Ventilation, LEED and lighting
All the suites have self-contained energy recovery ventilators (ERVs). This not only improves the overall system efficiency, but it also helps reduce the impact of the stack effect of a building of this size. Each ERV recovers energy from the building exhaust, improves the suite indoor air quality, and reduces the amount of outdoor air supplied to the corridor (reducing the overall building energy consumption).
In a condominium most of the amenity areas are not occupied during the day. In the larger amenity areas, a combination of ERV’s and HRVs are used to provide the required ventilation. Using a demand based system, with the use of CO2 sensors in the various rooms to control the operation of the ERV/HRV’s, we were able to reduce the overall energy usage in the space.
The building is targeting LEED certification, so it has other green building features, including water conservation. By selecting all low-flow fixtures we are able to reduce the potable water consumption by over 30%. In addition all the irrigation for the landscaping, i.e. the gardens on the podium roof, will come from rain captured from the roof and stored in a cistern located in the first basement level.
Electrically, we were able to reduce lighting power densities by specifying more efficient lighting, while working with the artist, interior designer and landscape architect to make their artistic vision a reality. All common areas have occupancy sensors installed to minimize energy usage.cce