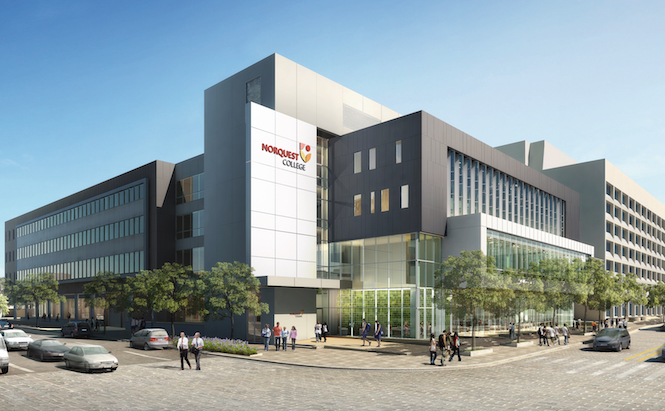 Rendering of the new Singhmar Centre for Learning at Norquest College in Edmonton (souce: DIALOG)

NorQuest College’s new Singhmar Centre for Learning transforms the school’s downtown Edmonton campus by presenting a welcoming and modern face to the existing concrete structure that has housed the College since 1971.

The $192.3 million expansion, opened to students in September 2017, allows NorQuest to expand its technology and program options while also serving as a catalyst for growth in the surrounding urban area.

The new four-storey, 22,500-sq.-m. post-secondary learning centre is comprised of flexible and functional spaces to meet the needs of students, staff, and the neighbourhood including 40-, 50- and 100-flex-seat reconfigurable classrooms, a library, media centre, and an open-to-the-public cafeteria. The centre also includes distinct spaces, including an aboriginal student centre and childcare centre to improve access and inclusivity on the campus. 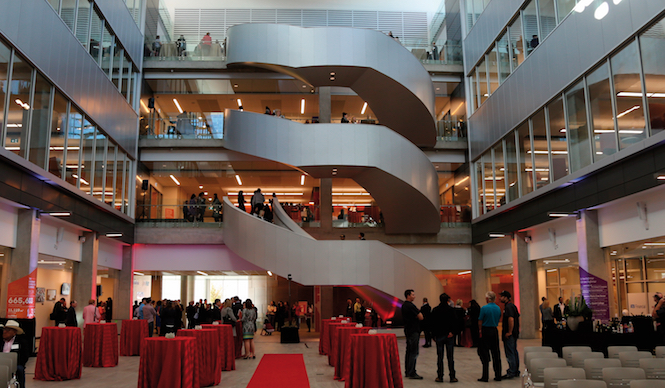 The feature curved stairway in the atrium. (source: DIALOG)

There are also some select floor structures constructed using structural steel, including the feature curved stairs in the atrium which serve as a primary transport between floors, and a pedway connecting the addition to the existing building.

Through consultation with an Elder associated with the Aboriginal program, the Indigenous student centre features a ventilation system designed to achieve net zero pressure, allowing users to engage in the ceremonial practice of smudging anywhere within the space.

The ventilation system throughout the entire building also incorporates sustainable design features, decoupling the heating/cooling from the ventilation reduces the air volume and allow for a 100% outdoor air displacement system.

The exhaust and return air from the building is collected and brought through a heat recovery wheel in the air handling unit, passing heat and moisture to the incoming outdoor air. A lower velocity system also permits a quieter system ideal for a learning atmosphere.

For central heating, the plan was to renew, expand and reuse as much of the College’s existing physical plant as possible. Two old boilers were replaced with a bank of seven condensing boilers set up as a modular system. Old pumps were replaced with variable frequency drives (VFD). A new primary loop distributes heating water to the older building’s zones, then the return water circulates to systems in the new addition prior to returning to the boiler system.

A combination of in-slab radiant, perimeter finned convection and overhead radiant heaters are integrated into the design. The main floor atrium is tempered with a switchover low temperature radiant floor heating/cooling system. 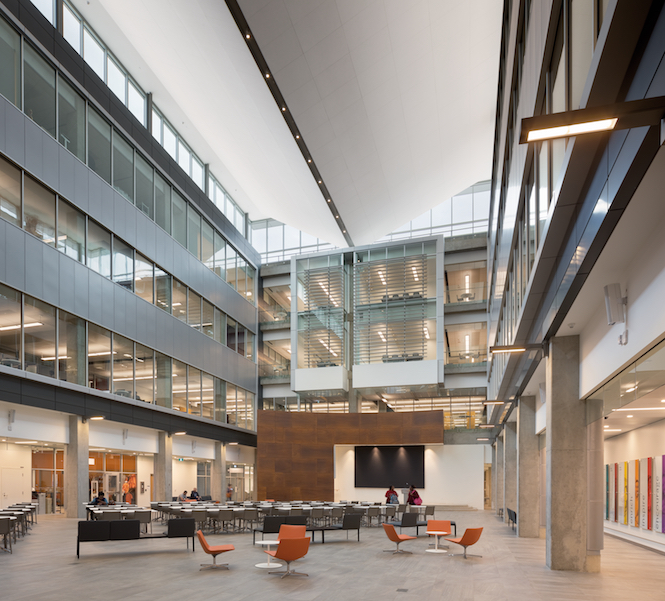